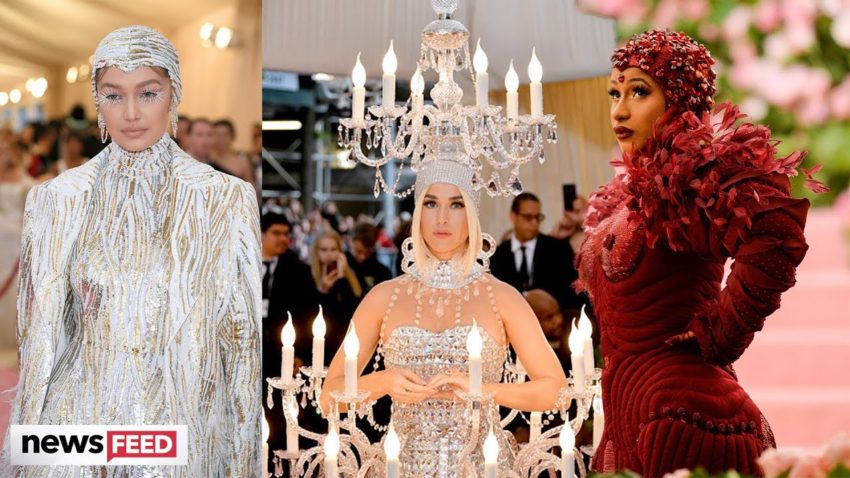 The 2019 MET Gala is officially underway, and we’re breaking down the most over-the-top fashion from tonight’s lavish affair, and you may wanna take a seat for this one.

What’s up guys, it’s your girl Drew Dorsey back here on Clevver News, and praise the fashion GODS because the most wonderful time of the year is upon us:

Although nobody really knows what celebs actually do once inside the event, what we do know is that they did NOT come to play this year. The 2019 MET Gala theme was ‘Camp: Notes on Fashion’, inspired by Susan Sontag’s 1964 essay ‘Notes on ‘Camp’, and no, I don’t mean the summer camp you had your first kiss at. To put it in fancy terms, QUOTE, “The essence of Camp is its love of the unnatural: of artifice and exaggeration.”

And we learned rather quickly tonight that ‘exaggeration’ was clearly the understatement of the century the moment Cardi B hit the carpet… literally wearing a carpet. They say it takes a village, but we’re assuming Cardi’s dress took an entire army to lift. She arrived in a deep red feathered gown and a Rihanna-inspired train circa 2015 MET Gala. She clearly did not take this theme lightly y’all.

But speaking of ‘light’, Katy Perry literally lit up the red carpet lookin’ like a chandelier straight out of Beauty and the Beast. Ok, so this Moschino ‘gown’, if you will, probably isn’t the most out-there look we’ve EVER seen, but one false move next to a set of sprinkles and homegirl is FRIED six ways from Sunday. But be our guest, KP.

You know when you see Jared Leto on camera, and you think, “SHEESH I seriously just can’t get enough of Jared Leto”? Well tonight, there was plenty of Jared Leto to go around as he brought a an extra head… like, his OWN head. I just… I have questions…

Like, is it heavy? Did you lose a bet? Did your makeup artist charge you extra? Where do you put it when you need to pee?

Annnnd in enters Ezra Miller, folks. No joke, if you put Jared and Ezra in a ‘Who Wore Themselves Better’, we’d have a tie breaker. Cue every and all ‘eye-catching’ puns because he literally had like 27 eyeballs attached to his face. He teamed up with Burberry Creative Director Riccardo Tisci for this gem of a statement ‘fit. He accessorized with a mask to hide his face, complete with a full cape and pinstripe suit with a jeweled corset.

Lupita Nyong’o took a page out of the Lisa Frank handbook tonight, as she embodied a literal walking rainbow, bold drag-inspired makeup and a statement-making afro with golden picks. No bad hair days, amiright?!

Cara Delevingne earns a spot on our ‘WTF’ list, and after attempting to try and figure out the correlation between a set of teeth, bananas, a fake hand and eyeballs disguised as candy, there’s just no explanation, because DUH – MET GALA.

Gigi Hadid channeled her inner-ice queen, donning a white, silver and gold Michael Kors catsuit with a matching headpiece and coat decked out in feathers. Oh, and did we mention that Michael Kors was her date for the evening? Well played!

As we near the end of our list, I can only imagine that you’re probably getting tired, and even a little hungry by now. Thanks to Katy Perry and this post-carpet snack, you’re probably about ready to dial up your Postmates driver as we speak. KP’s second course consisted of a full-on burger. Buns, condiments and ALL.

And that, my friends, is how you MET Gala. I’m officially wiped out, so I’m gonna turn it over to you guys – what did you think about this year’s fashion turnout, and which celeb’s outfits shocked you the most? Get to talking in the comments, and find me on my socials @drew__dorsey. After that, be sure to click right over here to check out even more MET Gala coverage, and don’t forget to subscribe and hit that bell so you never miss an update. Thanks for watching and stay weird, my friends.