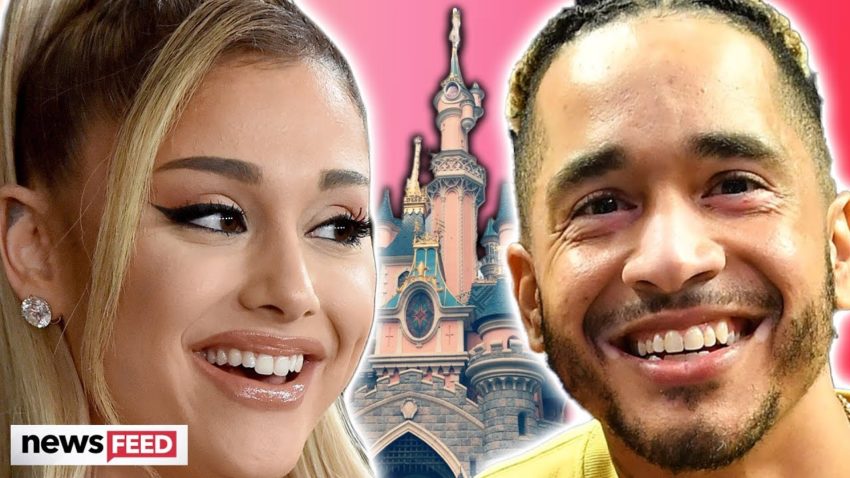 Ariana Grande seems to be adjusting to the post-tour life juuuust fine as she was spotted arm-in-arm with Social House singer Mikey Foster at the Happiest Place on Earth.

What’s up guys, it’s Sussan Mourad back here on Clevver News, and what better way to cure the post-Sweetener blues than by spending the day at the one place you’re destined to slap a smile on your face no matter what’s going on in your life?!

Ariana Grande had just the cure as she was spotted hanging out at Southern California’s Disneyland parks with her rumored flame and Social House singer Mikey Foster.

Considering any true Arianator knows her love of Star Wars, it seems she was at the park to test out the new Star Wars land.

A source revealed that the two were in the park for only about two hours and were seen enjoying a few rides, including the new Star Wars: Galaxy’s Edge and the new Guardians of the Galaxy ride.

Ari and Mikey were linking arms throughout the park, all while she was wearing HIGH HEELS, might I add.

Then again, do we expect anything less?

She was also seen staying close to Mikey throughout the day, and according to the source, they looked, “very attentive and relaxed in each other’s company.”

So it’s safe to say these two might’ve just confirmed what fans had been hoping for since last year.

Ari and Mikey first sparked dating rumors when he posted a sweet birthday tribute in honor of her last June to his Instagram, writing, “Ur one of the most incredible people the universe has to offer. I hope this year offers u nothing but the joy u deserve. Love u. happy birthday”

Shortly after that, the two collaborated on the track “Boyfriend” and its music video back in August, and caused even more speculation when their onscreen makeout sesh didn’t seem to be limited to solely “onscreen.”

So it could just be the fact that these two have been good friends for a while now, but we do have to point out that in the video’s behind-the-scenes footage, fans can’t be help notice that the two also appeared to be getting a little flirty, and not gonna lie, they are actually really cute together.

A source also revealed that the two sat next to each other at a surprise birthday party Ari hosted for her bodyguard at Siena Tavern after her Lollapalooza set the same month.

And lest we not forget about the time Ari’s brother Frankie Grande basically word-vomitted that the two were, in fact, dating.

Shortly after the song dropped, Frankie revealed that he went on a double date with Ari and Mikey.

He said QUOTE, “It was really fun. Game night! Board games! So fun.”

Frankie also seemed to give his seal of approval, adding, “I love Mikey. I think he’s a really sweet guy. So talented. So kind and so funny caring. He’s a great guy.”

Clearly things got awkward in the Grande household when Frankie quickly retracted his statement, and clarified that “game night” just happened to be a casual night with some board games and good friends, but it didn’t change Ari’s relationship status in the slightest.

Frankie wrote in a now-deleted tweet QUOTE, “My sister is not in a relationship. Everyone relax. She is very much single.”

He then opened up to People in a longer statement, saying, “Ariana and Mikey Foster are not in an official relationship. My comments about our recent hang as friends were not meant to be taken literally. It was literally four people meeting up as friends, and I would never comment on something so personal about her life anyway.”

When a fan asked about the inspiration behind the music video, Ari tweeted back saying, “well, i feel like this song captures a common theme in the lives of so many people i know ! people want to feel love but don’t want to define their relationship & have trouble fully committing or trusting or allowing themselves to fully love someone. even tho they want to.”

For now, I wanna know all your thoughts on Ari and Mikey’s unofficial Disney date, and whether or not you think these two could be something in the future, so get to talking down here in the comments.

After that, don’t forget to click right over here to check out another new video.

And before you leave, be sure to hit that subscribe button and click that bell, so you’re always up to date on the latest celebrity news updates.

Thanks so much for checking in with me here on Clevver News, I’m your host Sussan Mourad and I’ll see ya next time!