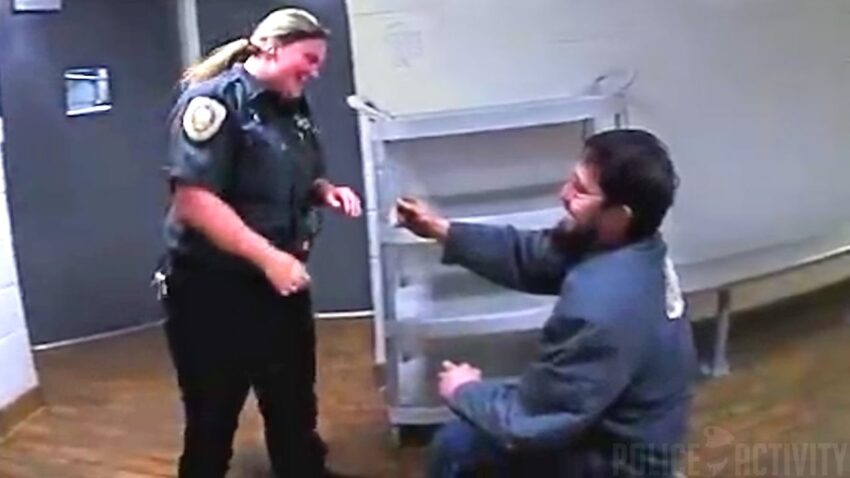 ** (Disclaimer: This video content is intended for educational and informational purposes only) **
A Nebraska correction officer had two back-to-back jaw-dropping experiences on Wednesday: The “arrest” of her boyfriend, followed by a marriage proposal. Cameron Dean decided to surprise his girlfriend Amber Kult, a correction officer at the Washington County jail, by enlisting the Washington County Sheriff’s Office to “arrest” him and transport him to the jail, where he would pop the question. Deputies with the Sheriff’s Office agreed to pick up Dean at his workplace, Long’s OK Tire Pros in Blair, and bring him to the jail where Kult worked. The deputy who picked up Dean called in the “arrest” to dispatch.

Adding to the quirkiness of the proposal? The entire set-up was recorded by the “arresting” deputy’s bodycam, which the Washington County Sheriff’s Office posted on its Facebook page, writing, “Every once in awhile something awesome happens in the Washington County Jail, yesterday was one of those days. The video speaks for itself. No inmates or Correction’s officer were injured during this incident.”

So the deputy arrives with a handcuffed, Dean, who is greeted by a surprised Kult, who says, “No. Hey, what the f****, man?” The handcuffs are removed, and Dean then drops to one knee, takes out a ring and proposes. Kult begins to tear up, covers her face, saying, “No, really?” Then jokingly says to her colleagues — who were in kahootz with Dean — “I’m going to kill you!” Asks one of the deputies, “So the big answer is?” Not surprisingly, Kult said “yes.”