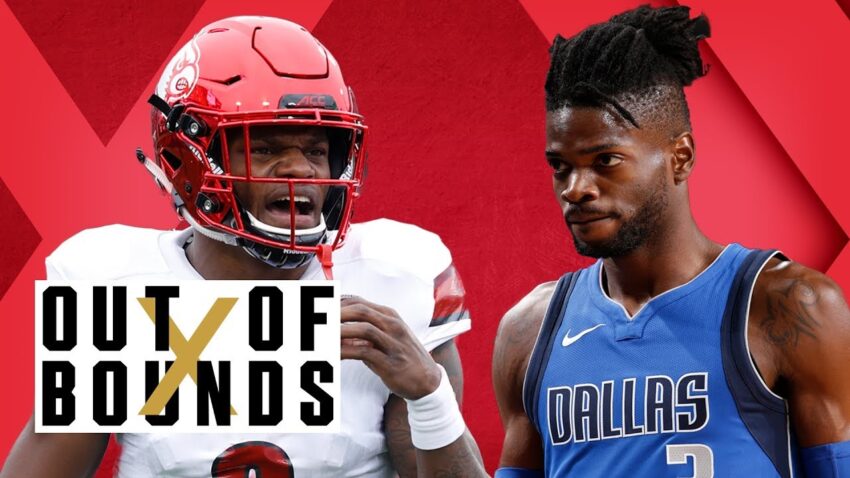 Today’s show (and desk) are jam-packed, as Gilbert Arenas and the #OutofBounds boys are joined by guest host and 2018 NFL Hall of Fame inductee Terrell Owens as well as Seattle Seahawks offensive lineman Duane Brown. First up, the guys discuss Heisman-winning Louisville quarterback Lamar Jackson and why bias against black QBs is still a thing in the NFL. T.O. goes in on former GM Bill Polian for his criticism of Lamar’s size and throwing and insistence that the lightning-quick quarterback should move to wide receiver. Duane explains what it was like when he made the transition from tight end to offensive lineman in college. Then, in “The Pull-Up,” Gil flames Nerlens Noel for failing a third weed test — earning himself a five-game suspension — and breaks down the sizable loopholes in the NBA’s drug testing system. The crew also provides some career advice for the Mavs center, who turned down a four-year, $70 million contract last summer in pursuit of a max contract that was never coming and had to settle for a one-year, $4.2 million deal. Next, after the New York Times revealed archaic, sexist, and demeaning rules for NFL cheerleaders, OOB weighs in on the inequality. T.O. and Duane torch Gil, who focuses primarily on their low pay and doesn’t see much wrong with it. Also, they school Gil when he tries to make a case that cheerleading is sexist against men. Finally, after NFL prospect Jerome Baker said that during an interview a coach asked what he’d do if he punched Baker in the face, the squad talks about the ridiculous questions teams ask athletes and what’s learned from them. In true Gil form, he has a question he’d love to ask coaches to turn the tables on them….

44 thoughts on “Bias Against Lamar Jackson; All the Nerlens Noel Fails; Face-Punch Reaction | Out of Bounds”