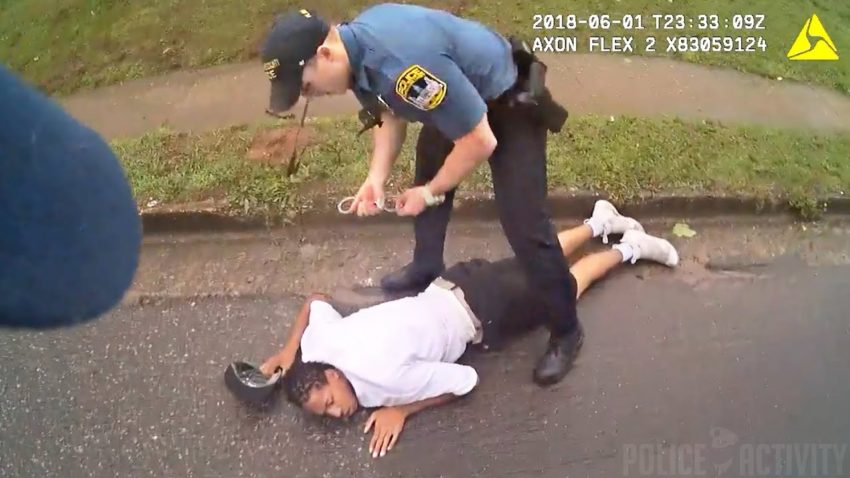 ** (Disclaimer: This video content is intended for educational and informational purposes only) **
On June 1, 2018 at approximately 7:30 pm, Officer Hunter Blackmon and Officer Taylor Saulters were on patrol in the area of Vine Street and Nellie B Avenue. Blackmon observed a subject, Timmy Patmon, which he knew to have a felony probation warrant. As the officers confirmed the validity of the warrant and attempted to make contact with Patmon, he fled on foot. Blackmon pursued Patmon on foot, and Saulters attempted to get ahead of Patmon with his patrol car. During the course of the foot chase, Saulters attempted to block Patmon’s path of escape on two occasions with his patrol car. During Saulter’s first attempt to block Patmon, Saulters struck a curb and flattened his driver’s side front tire. On Saulter’s second attempt to block Patmon’s path with his patrol car, and during the maneuvering of the patrol car Patmon impacted the right front quarter panel of Saulters’ car as Saulters was attempting to accelerate past Patmon.

Officers requested an ambulance to evaluate Patmon, and he was then transported to a hospital for evaluation. After being medically evaluated and cleared for arrest and booking, Patmon was turned over to the Clarke County jail. The extent of Patmon’s injuries were scrapes and bruises. Patmon is charged with violating his probation and obstructing a law enforcement officer. Athens police Chief Scott Freeman initially placed Saulters on administrative leave, initiated an internal affairs investigation, and requested that the Georgia State Patrol and Georgia Bureau of Investigation conduct independent investigations of the incident. After reviewing the officers’ body camera footage, and all the other facts and circumstances of this case, Chief Scott Freeman terminated the employment of Officer Taylor Saulters.