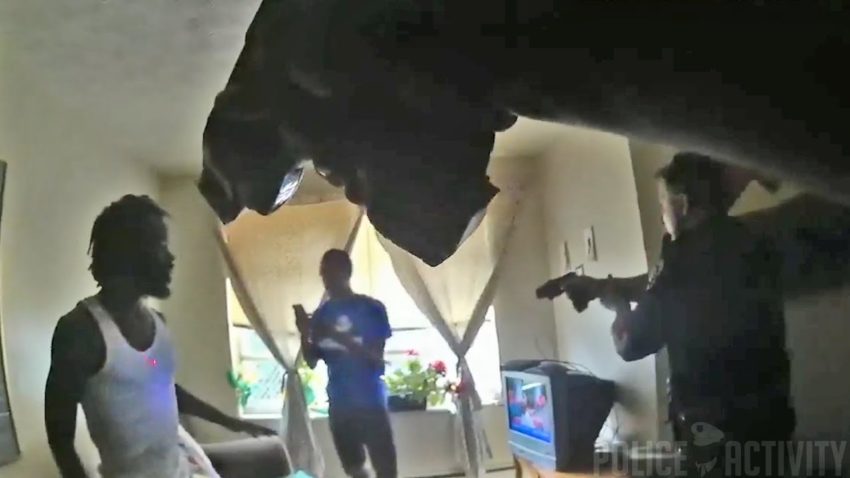 ** (Disclaimer: Video posted strictly for educational and information purposes only) **
Two law-enforcement officers in Ohio are being accused of police brutality after footage emerged of them tasering suspects during a domestic dispute call. One of the victims suffered a collapsed lung as a result of the incident. The video, captured on a bodycam, shows two officers responding to a domestic dispute in Cincinnati. The call was made by Angela Brown, who said her two sons – who are half-brothers – refused to get out of her house. The situation is initially somewhat calm. However, Brown can be heard saying: “Here they at – disrespecting me and everything,” referring to 24-year-old Richard Coleman and 25-year-old James Crawley. When Coleman gets up to speak to the officers and explain the situation, he is immediately met with a command to “sit down.” A small scuffle breaks out between the brothers when one jumps up in anger at the fact that the police were called. It doesn’t take long for one officer to point his taser at Crawley.

It escalates from there, and Crawley is tasered less than two minutes into the video. Coleman is also tasered at least four times soon afterwards. One brother pleads for the officer to listen to what he has to say. They refuse, and one shouts “Get on the ground…I’m gonna put you on the f**king ground!” A third officer eventually arrives at the scene, and the cops physically force both brothers to the ground. One officer can be seen pulling Crawley’s hair. “We’re not doing nothing!” one of the brothers shouts. Coleman suffered from a collapsed lung following the incident. He was recovering from back-fusion surgery at the time. Both brothers received their first criminal convictions as a result of the event. However, at no point in the video were they informed that they were under arrest, nor were they read their Miranda rights. This is particularly notable because Cincinnati Police Department policy states that tasers are only to be used on those who are “actively resisting arrest.”

The brothers were charged with resisting arrest and trespassing. Crawley faces an additional felony charge of assaulting a police officer, and could receive between two and eight years in prison and/or a fine of up to $20,000. The footage has prompted an extraordinary intervention by the Hamilton County prosecutor, who has instigated an external city investigation into the use of force, according to Cincinnati.com. An internal investigation by the department is also reportedly taking place. It’s not the first time that police in the US have come under fire for their heavy-handed use of tasers. RT spoke to Jordan Norris, who last year was repeatedly tasered by police after being detained on drug charges, despite being strapped to a chair and therefore not posing any threat.