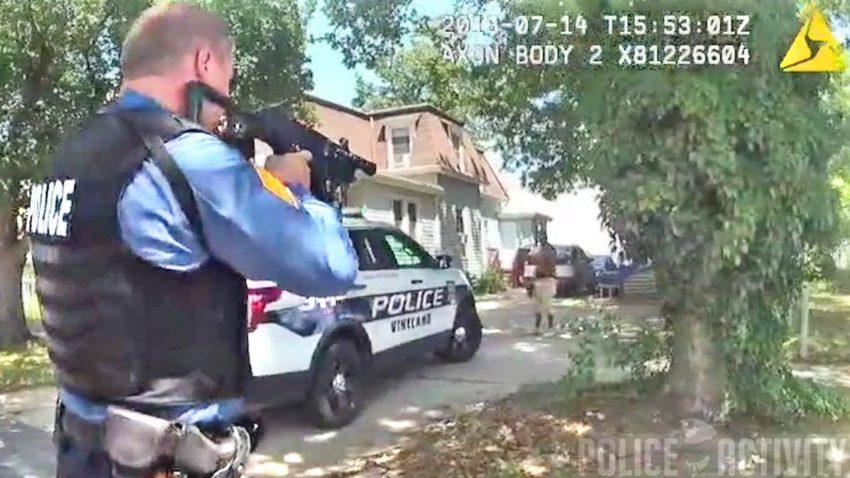 ** (Disclaimer: This video content is intended for educational and informational purposes only) **
The Cumberland County Prosecutors office released bodycam footage of a 28-minute encounter with Vineland police that ended with the suspect being fatally shot. The 37-year-old man had told the officers he was holding an explosive device wrapped in a shirt during a stand-off outside his home. The footage shows a shirtless Rashuan Washington pacing near the driveway of his house at West Wood Street while apparently coaxing officers to shoot him. “You’re gonna have to blow my brains out,” Washington is heard saying to the officers, who had arrived at the scene shortly before 11:30 a.m. after receiving a call about a man “acting suspiciously.” The videos, culled from the body cameras worn by eight officers, released Thursday by the Cumberland County Prosecutor’s Office show police shouting at Washington to relax and repeatedly warning him to “stay back.” After 28 minutes of back-and-forth, Washington runs toward an unidentified officer before being shot multiple times. Washington continued moving on the ground as an officer doused him with what appears to be pepper spray. Afterward, the officers sent a police dog to secure the item in Washington’s hands, authorities said. Washington was holding an eight-inch garden shear underneath a shirt, authorities said. Witnesses have said he was holding a water bottle.

“De-escalation techniques were used by the officers throughout the encounter,” County Prosecutor Jennifer Webb-McRae said in a statement Thursday. Onlookers were told to stay away from the home. Officers moved one woman out of an adjoined apartment and another woman out of a car parked in the driveway. At one point, the video shows an unidentified officer warning other officers: “We don’t know what [the object] is. He says if he takes off the lid, it’ll explode, and it’ll take all of us out.” Washington’s family retained an attorney earlier this week who questioned the police account of the incident and called Washington’s death a “senseless killing,” NJ Advance Media reported. The man told officers at the scene that he had two children, ages 11 and 13. He said he had recently been hospitalized and spoke of his girlfriend and kids. The officers at the scene have not been identified. The Prosecutor’s Office is investigating and will issue a report that will be reviewed by the state Attorney General’s Office.