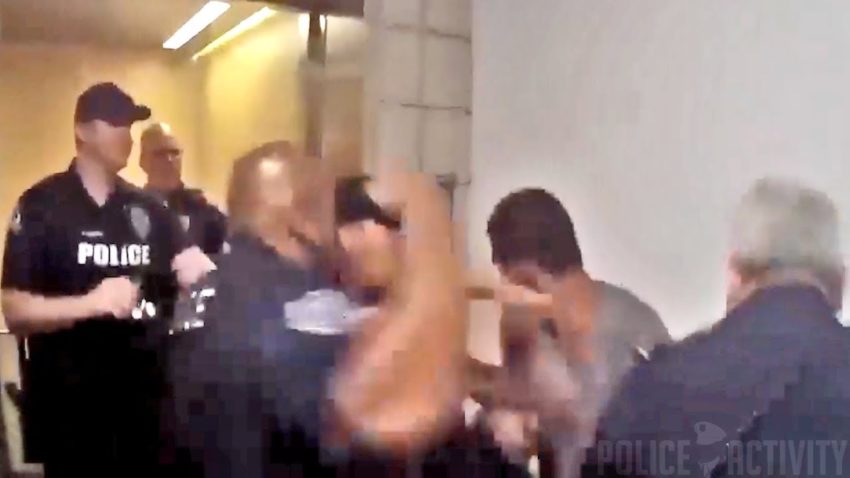 ** (Disclaimer: This video content is intended for educational and informational purposes only) **
One day after releasing surveillance video showing several officers beating up a man, the Mesa Police Department released body cam footage showing a different view. A police report including officers’ narratives of the incident were also released Wednesday. One officer justifies the beating because of 33-year-old Robert Johnson’s body language. Officers asked Johnson to sit down. Johnson refused and instead leaned against a wall. One of the police officers took this to mean Johnson was preparing to fight, according to the police report. “Johnson then leaned with his back against the wall, but with his legs fully extended. In that position Johnson not only had lateral mobility, but also a strong base in the wall to fight off of. I recognized this from combative training I have received in the past which, boasts on the necessity of putting a wall to your back when confronted with multiple opponents.” After observing his body language, the officer decided to detain Johnson to “prevent him from formulating a strategy,” the documents reveal. In the police report, the officer continues to note what he said was threatening body language.

“Johnson’s body language was projecting he was preparing for a physical altercation. Johnson’s shoulders were bowed forward slightly and head slightly nodded… Johnson’s breathing became shallow and intentional suggesting physiologically his body was transition to fight or flight mode.” An attorney for an Arizona man whose beating by police was caught on camera says the Mesa Police Department officers should be suspended and disciplined. Four officers are on leave while the department investigates the May 23 incident in which three officers are seen punching the man, who does not appear to resist arrest. The video is from an apartment complex surveillance camera. Attorney Benjamin Taylor says his client was not a threat and had already been searched when police started punching him. Mesa police say officers were responding to a call from a woman who said her ex-boyfriend was trying to break into her apartment. The man who was punched was not the suspect.