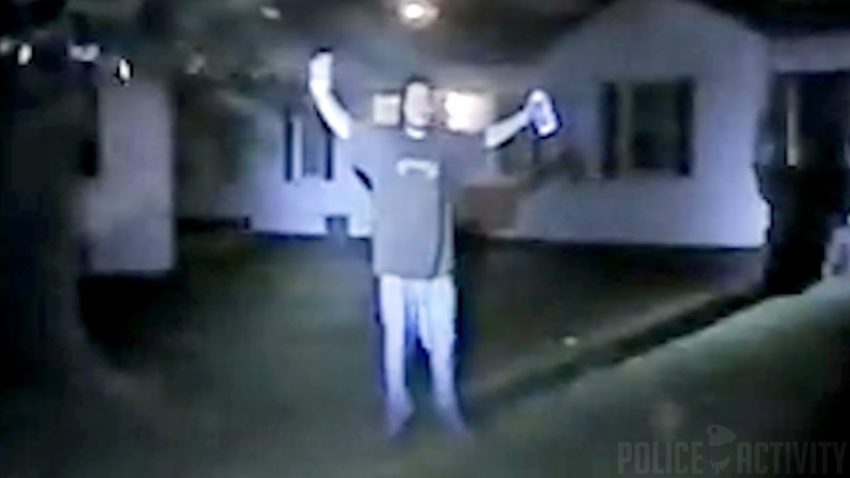 ** (Disclaimer: Video posted strictly for educational and information purposes only) **
An Oklahoma City officer has been charged with second degree murder in connection to the fatal shooting of a suicidal man in November. Court records filed Dec. 5 show that Oklahoma City Police Department Sgt. Keith Sweeney faces a complaint of murder in the second degree or the alternative of manslaughter in the first degree. He was booked through the Oklahoma County Jail on the complaint early Tuesday. According to police, officers responded to reports of a suicidal person around 2:40 a.m. in the courtyard of Parkview Village Homes, 1416 SW 20 Street. When officers arrived on-scene, they say Pigeon was holding a bottle of lighter fluid and threatening to light himself on fire. The officers attempted to get Pigeon to drop the lighter fluid and get on the ground, but he did not comply. Court documents show that Officer Troy Nitzky deployed a bean bag shotgun, striking Pigeon in the left hip. Sergeant Sweeney then discharged his weapon striking Pigeon five times. Pigeon was provided medical attention but died on scene.

Oklahoma County District Attorney David Prater said two of three officers responding to the incident did everything right to approach the situation via non-lethal methods. “This is one of those situations where we’ve alleged that an officer crossed the line and in fact broke the law,” Prater said. Officer Nitzky and a second officer were the first to approach Pigeon. Sweeney can be heard as he arrives at the scene ordering Pigeon to drop what he had in his hands. Body camera footage catches Sweeney stating “I will f****** shoot you” just moments before firing his weapon. Following the shooting, Sweeney can be heard asking officers if the man had a knife. Only a lighter and lighter fluid were found at the scene. In interviews with authorities Sweeney has stated that he believed Pigeon had a knife in his hand and that his life was in danger. “This is a tragic situation that will be a learning situation for everyone,” Prater said. The second degree murder sentence carries a sentence of 10 years to life while the alternative first degree manslaughter charge is four years to life.

The Oklahoma City Fraternal Order of Police released the following statement on the charge: “Police officers are routinely placed in dangerous situations where they must quickly make life-or-death decisions. We caution citizens against jumping to conclusions until the facts are fully presented. At this time, the FOP is not privy to the findings of the criminal investigation, and the video released today is only one piece of the puzzle. We hope to have more information about the particulars of this tragic situation soon. The FOP will always support members who act in good faith under the policies of the Oklahoma City Police Department and the law.We know these are trying times for Sgt. Sweeney and his family, and we’re here for them. We also offer our sympathy to Mr. Pigeon’s family and loved ones.” Documents filed Tuesday state that Pigeon was not armed and “not a threat to the officers”. Sweeney has been on paid administrative leave since the incident.