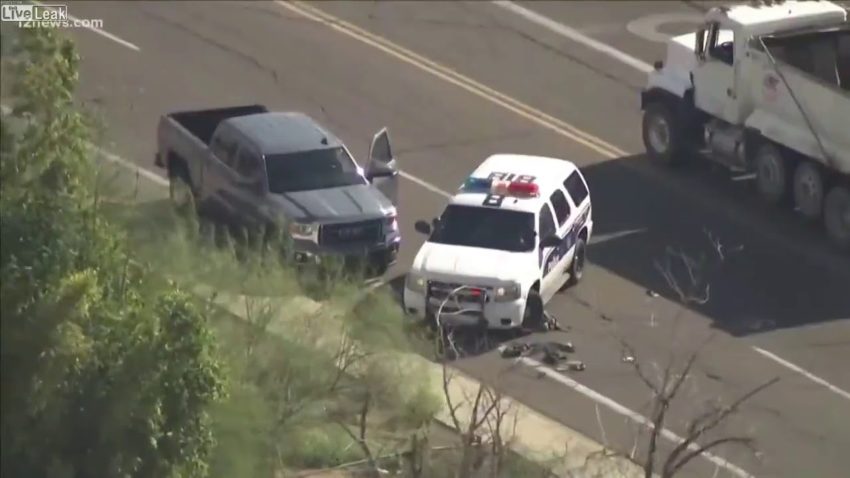 Officials on Wednesday identified a man suspected of pointing a gun at officers before he was shot by Phoenix police on Jan. 10.

The officer who fired also was identified.

Isadore Deshon Byrd had been holed up in a pickup truck and people were yelling at him to get out when officers arrived at an accident scene that day, Phoenix police said. Nearby was the wreckage of a box-style produce truck and a van that had collided near 32nd Street and Southern Avenue.

Sgt. Jonathan Howard said two police officers were trying to negotiate with Byrd through a closed door when he “jumped out with a handgun” and pointed it at them. One of the officers, identified Wednesday as Officer David Doherty, fired and struck Byrd.

Howard said the officers may not have known at the time that Byrd had been driving the produce truck, which was reported stolen earlier in the day from a business in central Phoenix.

Those officers had initially been headed to reports of several hit-and-run crashes at 48th Street and Broadway Road. Howard said the produce truck rear-ended a vehicle there and then backed up into another car before fleeing at about 11:30 a.m.

The two drivers whose cars were hit, neither of whom were injured, followed the produce truck south on 48th Street and then west on Southern Avenue.

Howard said the produce truck ran through a red light at 32nd Street and struck the van, the driver of which suffered minor injuries and had to be taken to a hospital.

After the shooting, Byrd was taken to the hospital for non-life threatening injuries.

He was released from the hospital and booked on one count of aggravated assault on police and one count of vehicle theft, Howard said on Wednesday.