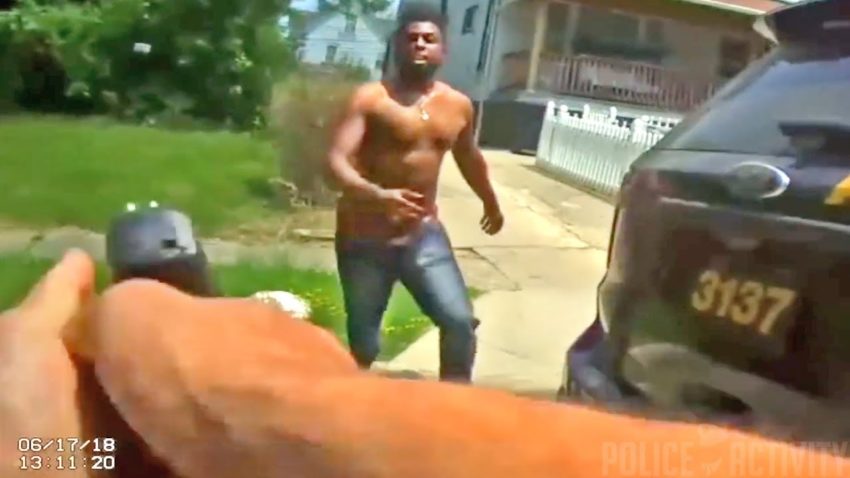 ** (Disclaimer: This video content is intended for educational and informational purposes only) **
The East Cleveland police department has released body cam footage of an officer-involved shooting that happened Sunday afternoon. Officers said that the suspect attacked a woman in the middle of Beersford Road, and also fired shots into the air around 1:30 p.m. “Officers approached, they observed the male striking the female on the ground. Immediately… as soon as officers got out of their vehicle the suspect charged one of the officers,” said Commander Scott Gardner, of the East Cleveland Police Department. The video released shows the suspect lunging at officers when they arrive on scene. An officer fires at the suspect, and the man continues struggling with officers until he is ultimately handcuffed. Commander Gardner explained that the two officers involved were injured during the incident. One officer has an orbital eye fracture and one officer has a broken hand. Both were treated and released from University Hospitals. State agents with the Bureau of Criminal investigation and East Cleveland police continue to investigate the incident.

Police initially got a call about a man beating a woman in the middle of the street, and witnesses also told police the man had been firing a gun in the street. Officers told that they were able to hear the gun shots from the department’s parking lot, so they were quickly able to respond to Beersford Road. Another witness describes nearly being attacked by the suspect while driving down Beersford. “This guy came out of nowhere and approached my car like he was going to attack me in my car so I backed up and went around him,” said Victor McCallum, of East Cleveland. “It’s not normal over here, it’s very quiet over here. I don’t know what he was angry about or why it came about,” he said. The female victim who was attacked has not been identified, but police said at last check she was in critical condition. She also explained in the body cam footage that she was “just walking down the street” and did not know the suspect.