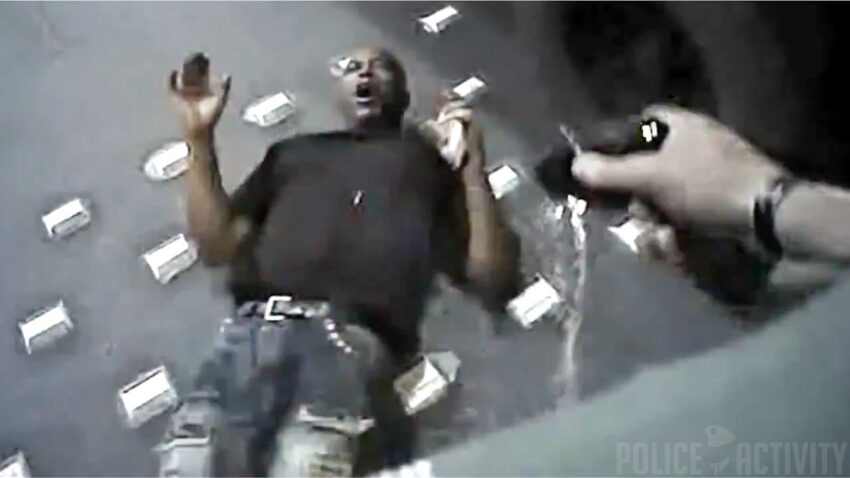 ** (Disclaimer: Video posted strictly for educational and information purposes only) **
A Las Vegas police officer used a stun gun seven times and a mixed martial arts chokehold to subdue an unarmed man who died after a foot chase through a casino over the weekend, authorities said Wednesday. Officer Kenneth Lopera thought the man had tried to carjack a pickup truck with two people inside before the officer fired the stun gun in a series of staccato bursts and used the chokehold – a tactic that is not approved by the department – early Sunday at The Venetian resort, Clark County Undersheriff Kevin McMahill said. McMahill showed video from Lopera’s body camera during a news conference on the incident. He did not release the footage and it was unclear how much editing had been done. “Don’t move! Get on your stomach!” Lopera can be heard telling the man who the Clark County coroner identified as Tashii S. Brown. Police have used the name Tashii Farmer. “I will!” Brown can be heard saying. The video then shows Brown on his back with his arms raised before another jolt from the stun gun makes his body stiffen. Brown cries out, “Please! Please!”

Officer Lopera then wrestle as he attempts to handcuff Brown. Lopera punches Brown’s head and neck from behind as Venetian security guards join the effort and other police officers arriving. Sheriff Joe Lombardo said that there was no indication that race played a role in the incident. Brown’s cause of death has not been determined and an investigation is ongoing. McMahill said Lopera was heard saying he used a “rear naked choke,” a prominent mixed martial arts chokehold that differs from a department-approved technique that some departments call a “lateral vascular neck restraint” and others refer to as a carotid artery hold. Department officials said previously that the officer had used the approved technique, which is banned in many other cities. McMahill said Lopera held Brown’s neck for more than a minute – far longer than the seven to 10 seconds it might take for an approved carotid restraint to render a person unconscious.

Lopera, 31, has been a Las Vegas police officer for five years, McMahill said. He is on paid leave pending departmental and district attorney reviews of the incident. Lopera is being represented by the Las Vegas Police Protective Union. Steve Grammas, union executive director, declined to comment, saying he had not seen all the video from the incident. Lopera has not provided a statement about the incident to department investigators. McMahill said Brown was sweating and appeared disoriented when he initially approached Lopera and a partner in a casino coffee shop, said people were chasing him, and ran into an employee-only area, down hallways and outside to the parking area. Brown also used the name Tashi Sebastian Farmer and Tashii Farmer-Brown. He grew up in Hawaii, where records show he was convicted of assaulting his girlfriend and was released from prison in January 2016. He pleaded guilty in February in Las Vegas to misdemeanor driving under the influence.

In Las Vegas, he pleaded guilty in February to misdemeanor driving under the influence. Brown was a father of two children in Hawaii and lived with his mother in Las Vegas where he had a business selling shoes, hats and clothing, according to Tynisa Braun, a cousin in Honolulu. Clark County District Attorney Steve Wolfson said there will be a public use-of-force review to air the findings of investigations into Brown’s death. The sheriff said the reviews could take several months and asked for patience from the public. “We’ll be fully transparent and we will look at this event with a very critical eye,” Lombardo said. Brown’s mother, Trinita Farmer, said she doesn’t want to see the video of the struggle that left her son dead. “I don’t want to look,” she said. “I just want to bury my son.”