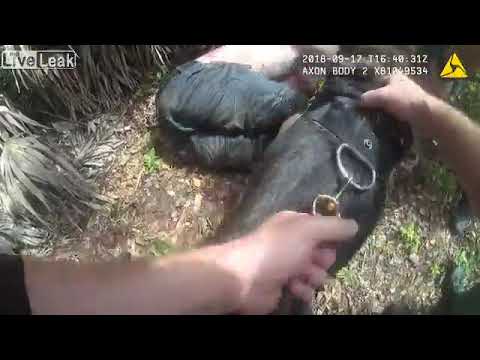 A police dog in Florida proved on Monday what a good boy he is.

The Pasco County Sheriff’s Office said the K-9 named “Titan” helped take down a man who tried to kidnap a child from a home in New Port Richey, located northwest of Tampa on Monday.

The man, identified as 24-year-old Kevin Wilson, had arrived at the home and climbed up to the second-floor window. Wilson entered the home, argued with a woman inside and then grabbed a child and took off.

The sheriff’s office said that there was a no-contact order in place, and Wilson was not supposed to have contact with the or to enter the home. The child’s uncle grabbed his gun and confronted Wilson in the front yard before the 24-year-old released the child and fled,

Wilson drove off but ended up crashing his car. He ran into the woods, which caused several schools to go into “controlled campus” as police searched for Wilson with a helicopter and K-9 units.

An officer and Titan eventually caught up with the 24-year-old while he was running in the woods, and the police dog quickly went to work. In surveillance released by the sheriff’s office, Titan can be seen latching onto Wilson’s arm with his teeth as a deputy commands the 24-year-old to get onto his stomach or else the dog would not let go.

Wilson has been charged with interference with custody, child neglect in addition to violating his no-contact order, and is being held at the Pasco County Jail.