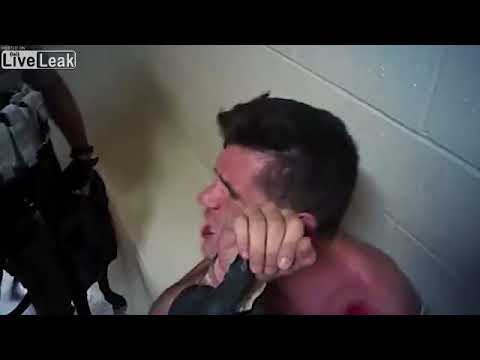 Phoenix, AZ – A 27-year-old Arizona man is suing the Maricopa County Sheriff’s Office after he was attacked by a canine officer for more than three minutes while handcuffed in a holding cell.

Shane McGough, who is being represented by attorney Steven Guy, is seen on body camera footage screaming while being viciously bitten by the dog.

“He was obviously in a great deal of pain screaming and he was complying with all of their commands,” said Guy.

The incident, which took place in July of 2017, started earlier that day at the Salt River. Guy said the 27-year-old and his friends got into an argument in the parking lot after a collision.

MCSO deputies responded to the scene and allegedly began to search McGough’s friend’s truck without permission.

“He [McGough] reached his arm in between the sheriff and the truck telling him this is not a proper search it’s illegal,” said Guy.

Then, a physical fight ensued between McGough and the deputies. They ultimately tackled him, but a deputy suffered a broken leg in the process. McGough was then arrested and taken to a nearby substation, where the K9 attack occurred.