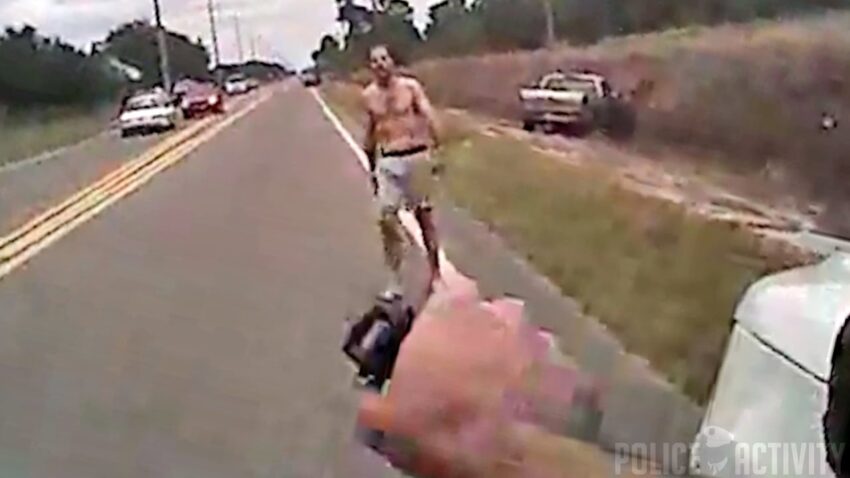 ** (Disclaimer: This video content is intended for educational and informational purposes only) **
Pasco County, Florida – A man wearing nothing but boxer shorts was arrested after a bizarre encounter with a Pasco deputy that was caught on tape. The Pasco County Sheriff’s Office says Sgt. M. Rosenbloom was driving north on Handcart Road when he came across the scene of what he presumed to be a crash. Several cars were stopped near the intersection of Handcart and Kiefer Road, when all of the sudden, a brown Chevrolet pickup being driven by Joseph Pemberton, 41, backed away from the cars and veered into the path of Rosenbloom as his patrol car came to a stop. Footage from Rosenbloom’s body camera shows the suspect as he stares at the deputy, accelerates and backs into the Rosenbloom’s car.

Pemberton is then seen in footage leaving the vehicle and running into the middle of the road, where he starts yelling and dancing before he charges at the deputy, who in response deploys his taser and incapacitates Pemberton. With the help of a bystander, Pemberton is placed in handcuffs. He then tells witnesses he had experienced a “revelation.” Pemberton suffered taser punctures and abrasions from being on the pavement, but no other injuries were reported. He was taken to the Dade City Hospital for medical clearance. Pemberton now faces charges for aggravated battery on a law enforcement officer and child neglect.