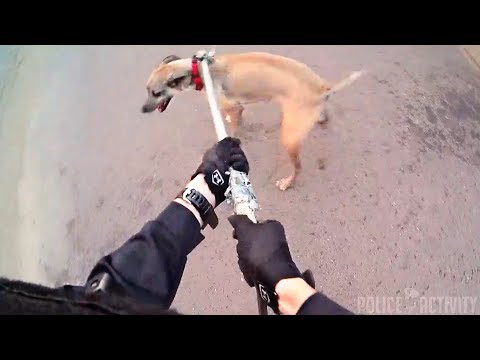 ** (Disclaimer: This video content is intended for educational and informational purposes only) **
Newly-released body camera footage from Mesa Police Officer Robert Goodrich shows the moments before , during and after he jumped into action. “I knew I had a snare in my truck and that canal is very slippery,” he said. “It could be deceiving, but I had to pretty much straddle it so I didn’t fall in myself.” The dog, named Sparky, was caught on camera 30 minutes after the pup chase some ducks and fell into the canal. Sparky’s owner, John, had to watch helplessly as his best friend floated away. “He’s my every day guy,” he said. John thought it would be the last time they saw each other. “I can’t imagine what the days would have been like without him,” he said. John is a veteran of the Vietnam War and Sparky helps him with his post-traumatic stress disorder. When he got the call later that morning that Sparky was alive thanks to a quick-thinking officer, he knew he needed to meet the man who made it all happen. “We’re both veterans, have a lot of respect for each other,” John said. “I think that he has a love of dogs like me. He understands how much this guy means to me, he has some of his own. I want to say thanks, and I think he knows how much I appreciate him.”