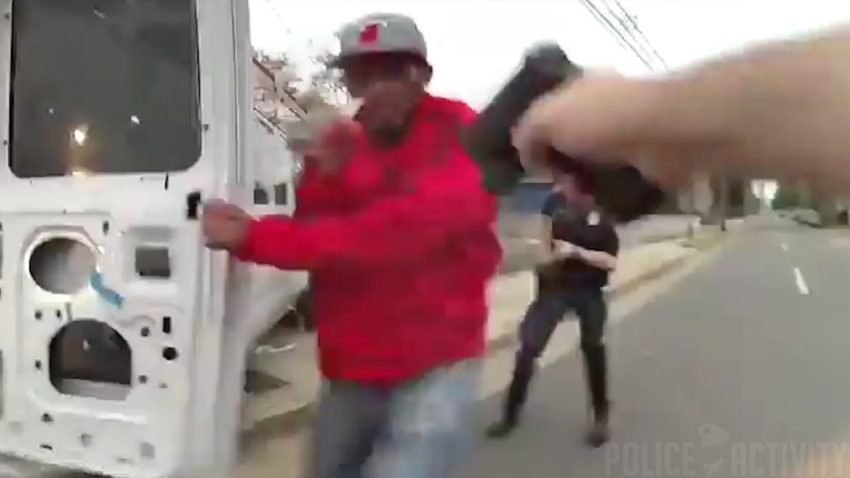 ** (Disclaimer: This video content is intended for educational and informational purposes only) **
Body camera footage of the police-involved shooting of Timothy Deal on North Kentucky Avenue was released Tuesday by the Atlantic County Prosecutor’s Office. On June 22, Atlantic City Police Officers responded to the 600 block of North Kentucky for a hit-and-run crash with injuries, according to previous reports. During the investigation, Deal, who was not involved in the accident, approached and allegedly stabbed one of the officers with a knife. The attack was unprovoked, according to a statement from the Prosecutor’s Office. The body camera shows Deal approach one of the officers with a knife and then swing it at him. The officer yells at Deal to drop the knife and then shoots him several times as he swings the knife. Deal stumbled backward and then fell to the ground with the knife still in his hands. The officers then tell him to drop the knife, which he does, and then roll him over and put him in handcuffs. After shooting Deal, the officer, who is not identified and whose face is blurred in the video, yells into his radio, “Shots fired, male down, officers OK. … I might be stabbed; I’m not sure.” “The death of Timothy Deal, while tragic, was in response to his unprovoked attack on a police officer with a knife,” Atlantic County Prosecutor Damon G. Tyner said in a statement. “The unfortunate circumstances, where unarmed individuals have been assaulted and in some instances killed, that have occurred throughout the United States should not be compared to this matter. Each incident has its own set of facts and must be investigated separately.”

The injured officer and Deal were transported to AtlantiCare Regional Medical Center, City Campus. Deal was pronounced dead at the hospital’s trauma center. The injured officer was treated and released, according to the Prosecutor’s Office. The Southern Regional Medical Examiner’s Office conducted an autopsy of Deal, which determined he died from multiple gunshot wounds, according to the Prosecutor’s Office. The investigation is ongoing pending, but not limited to, submission of evidence to the New Jersey State Police Ballistics Laboratory, according to the Prosecutor’s Office. The prosecutor’s Major Crimes Unit is conducting the investigation without the participation of the Atlantic City Police Department, as per guidelines from the New Jersey Attorney General’s Office. “We must not lose sight of the fact that a sworn police officer reported to the scene of an accident to protect the public, and was attacked for no apparent reason,” Tyner said. “The officer defended himself and protected the public from untold harm. This incident reminds us of how fragile life can be, and we should all be thankful that no innocent bystanders were injured.”