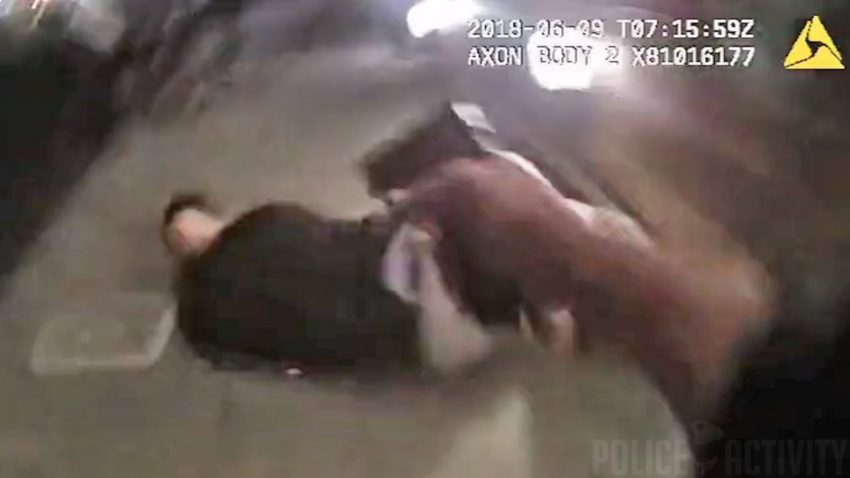 ** (Disclaimer: This video content is intended for educational and informational purposes only) **
Body-worn camera footage released Thursday showed a San Francisco police officer shoot an armed suspect in the back while the man ran from a North Beach corner where he was stopped for drinking from an open container. Oliver Barcenas, 28, was shot from behind after pulling out a modified pistol while running down Grant Avenue toward Green Street last Saturday, according to police Cmdr. Greg McEachern. Video showed Barcenas passing through a crowded sidewalk with an unidentified officer chasing behind him. The shots rang out shortly after midnight as revelers filled the area for the last game of the NBA Finals, raising concerns among residents at a community meeting Thursday that a bystander could have been struck. The shooting also prompted some to question whether the officer acted too quickly. “They were drinking from an open container, and all of a sudden the police come and everything falls apart,” said Joanne Keaney, who attended the meeting. “What does it mean that he had to shoot him to stop him when he didn’t even know what was going on?”

Barcenas, a San Francisco resident and known gang member, had been shot before by police. In 2012, Assistant Deputy Chief Toney Chaplin shot Barcenas three times during a pursuit in the Mission in which Barcenas carried a loaded semi-automatic pistol. Chaplin, who later served as acting chief, was a sergeant at the time. In the latest shooting, McEachern said Barcenas was standing on the corner and drinking with a group of four men. The body-camera footage showed him run after a brief verbal exchange with the officer over the open containers. During the pursuit, McEachern said Barcenas threw off his jacket and pulled from his waist a Glock .45 Caliber pistol equipped with a laser sight and loaded with 26 rounds. Video showed Barcenas run between people on the sidewalk, including two women holding one another in a firm embrace. McEachern said the officer fired two rounds at his back, but it is unclear whether both struck Barcenas.

Barcenas fell to the ground as an angry crowd formed around the officer and police secured the area. “He had a firearm,” an officer can be heard saying in the video to another cop. “He had like a Tec-9… Dude back people up. There’s a gun around here.” Police later collected body-worn camera footage from the officer and his partner, who did not witness the shooting because he was parking his vehicle, as well as surveillance footage that captured the shooting. “Those videos do not look good,” Supervisor Aaron Peskin said after police played the videos at the meeting. “I did not see the part where he takes the jacket off. I did not see the part where anyone is swinging around with a gun.” Peskin also noted that there are investigations ongoing into the shooting. Natalie April, 24, said at the meeting that she used to work with Barcenas at Farmgirl Flowers in Potrero Hill. “I just feel like the officer involved in this shooting jumped the gun on it,” April said. I think he was doing his job, but it looks really bad. I think honestly that he panicked so I’m disappointed.”

Theresa Flandrich, who described herself as a mother who raised a child in North Beach, said she was concerned that a bystander could have been struck, but also that the four men were stopped in the first place for having open containers. “It’s just shocking to me to see this,” Flandrich said at the meeting. “I would like some reassurance that this is not the usual… Was it their color of skin? Was it their hoodie jackets? What would make you stop this particular group?” Wanda Ravernell, a 64-year-old Oakland resident at the meeting, wondered what would have happened if the officer had missed. “It looked very dangerous to me that there were so many people on the street that night,” Ravernell said. “That looked very careless to me.” Barcenas was arrested on suspicion of various charges including being a felon in possession of a firearm. He was transported from the scene with life-threatening injuries and remains at the hospital.