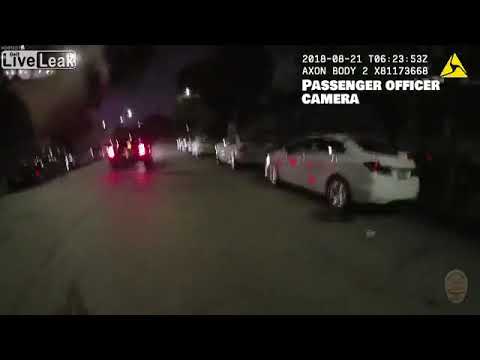 On August 20, 2018, around 11:27 p.m., Metropolitan Division uniformed officers were conducting crime suppression in Rampart Division. While driving on the 2200 block of Ocean View Avenue, they observed a lone male individual (later identified as Dennis Smith) straddling a bicycle in the middle of the road and observed him commit a traffic violation. The officers initiated a traffic stop for the violation and as the passenger officer exited the police vehicle, Smith got on his bicycle and rode off. The driver officer then drove forward in an attempt to cut Smith off as his partner ran after him. Smith suddenly cut in front of the police vehicle, reached into his cargo shorts, removed a handgun and pointed it directly at the driver officer, which resulted in an Officer-Involved-Shooting.

Smith then fell off his bicycle and ran on foot as both officers went in foot pursuit. The short foot pursuit ended just outside of the St. Vincent Medical Center, at which time the officers were involved in an additional use of force, in order to effect Smith’s arrest. Smith was not struck by gunfire and only complained of chest pains. Smith was transported to a local hospital where he received medical treatment and was released for booking. Smith was eventually booked for (69 PC) of the California Penal Code.

During the foot pursuit Smith discarded a handgun that was recovered and later determined to be a pellet gun.

Fortunately, no officers or persons were injured as a result of this incident.

LAPD’s specialized Force Investigation Division (FID) responded to the scene and began interviewing witnesses and collecting forensic evidence. A representative from the Office of the Inspector General responded and monitored the investigation.

The complete investigation will be reviewed by the Chief of Police and the Board of Police Commissioners and the Office of the Inspector General to determine the thoroughness and accuracy of the investigation and whether the use of deadly force complied with LAPD’s policies and procedures.