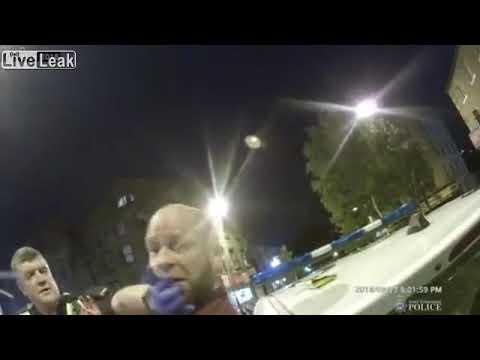 Horrific footage of the moment a savage and drunken thug bites down on a policeman’s finger has been released by West Yorkshire Police.

Daniel Brearley was jailed for three years on Monday for the disgusting attack on the Pc, as well as glassing a friend in the face who was trying to calm him down.

West Yorkshire Police agreed to release the footage after a request from Examiner Live.

It shows Brearley under arrest and restrained against a police car screaming obscenities at the two police officers at the scene.

He is heard to shout, ‘Have I spat?’ The court was told he had spat at officers in the past.

One officer has his hand on Brearley’s face before Brearley suddenly pushes up and bites down on the officer’s finger, which the court heard caused ‘immense pain’.

He is then pushed to the floor by both officers, while the officer wearing the bodycam can be heard shouting, ‘get off him now!’

Bradford Crown Court heard on Monday that the officer was still waiting for the all-clear from blood tests taken after the attack in August.