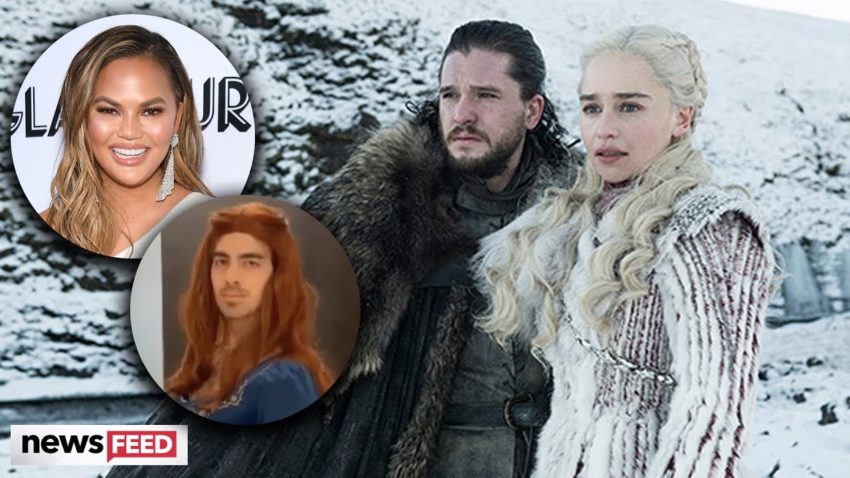 The final season of Game of Thrones has finally arrived and we have all the feels. Ok so first of all, if you haven’t watched Game of Thrones by now, there is no excuse. There were articles giving timelines on when to start watching old episodes so you could finish the day before the premiere of this final season. I’m also sure multiple people have also told you that it is one of the most amazing shows on television. However, I’m going to assume that if you’re watching this video you are a fan, but if by chance you have never watched Game of Thrones, just know that Winter is Coming for you. Alright, before we continue, I’ll try not to give any spoilers away, but I will say that the premiere was so freaking good. Of course fans and celebs had to give their reactions on social media. One of my favorite posts was from Joe Jonas who posted this video of him in full on costume and captioned it with “MOOD”. Of course you know he had to support, especially because his fiancé Sophie Turner who plays Sansa Stark. Nick Jonas also tweeted his support saying, “Now it’s GOT time. let’s do this!” Ed Sheeran who actually made a cameo in Season 7 as a Lannister soldier, was tuned into the premiere. And he was mentioned last night as well. I’ll say spoiler alert, even though this is so minor, but I know how sensitive people can get. So again spoiler alert. In last night’s episode, some of the women in a brothel are talking about the Lannister soldiers attacked by Daenerys Targaryen. And let’s just say Ed Sheeran is proud of his character. He posted the dialogue between the brothel women on his Instagram story. One woman says, “That boy Eddie.” And another says “The ginger?” “That’s him. Come back with his face burned right off. He’s got no eyelids now.” “How do you sleep with no eyelids?” Ed responded saying “Thanks @gameofthrones, I knew I was a survivor.” One celeb apparently knows how it all ends. Zach Braff posted this photo with Kit Harrington and captioned it “He told me everything.” I’m sure we can all agree that Kit could tell us that the time is now 10:30 and we would smile forever. Moving on, Sofia Vergara and Joe Manganiello proved that they are the ultimate fans. They didn’t just tweet, they threw a whole freaking Game of Thrones party with costumes, cake, a food truck, and of course her son Manolo was there and posted this hilarious snap to show how extra his mom is. He also brought Baguette who stole the show in her outfit! Jimmy Fallon was also in costume saying “Even direwolves were once puppies.” Reese Witherspoon is over here posting funny Gifs to show her support. She said, Have a very important date with my couch tonight… excited is an understatement!!! Do you say Gifs or Gifs by the way. Let me know in the comments. Of course there’s always that one quote that has everybody talking. I’ll say SPOILER ALERT again so nobody gets mad at me. So at one point Cersei says a quote that essentially went kind of viral on Twitter. So much so that Tiffany Haddish and Danielle Brooks from Orange is the New Black posted it. In the scene, Cersei says to her suitor, “You want a whore, buy one. You want a Queen, earn her.” OOOOPPP. But y’all, please don’t start using this as your IG caption. Now of course not everyone is a Game of Thrones fan including Chrissy Tiegen who tweeted out one of the funniest tweets I’ve seen in a while. She tweeted, “you guys really fucking love game of thrones. which is great. it is great to love things. I honestly thought it was the last episode ever or something, I’ve never seen humans so collectively excited. i am happy for you I really am. excited to find my game of thrones one day.” She also posted videos of her interrupting John Legend multiple times as he tries to watch in peace. ANYWAY! The season premiere is done which means we only have 5 episodes left. And don’t worry, last night’s episode was the shortest episode that we will get this season. Alright, I want to know what you thought about the premiere, and what were some of your favorite moments? Let me know in the comment section below!!! Also click right over here for another new video and of course don’t forget to subscribe and click that bell so you don’t miss a single video. I’m your host Emile Ennis Jr. You can find me on Instagram, Twitter, and YouTube @emileennisjr!

For More Clevver Visit:
There are 2 types of people: those who follow us on Facebook and those who are missing out

Add us to your circles on Google+:
Tweet Me: