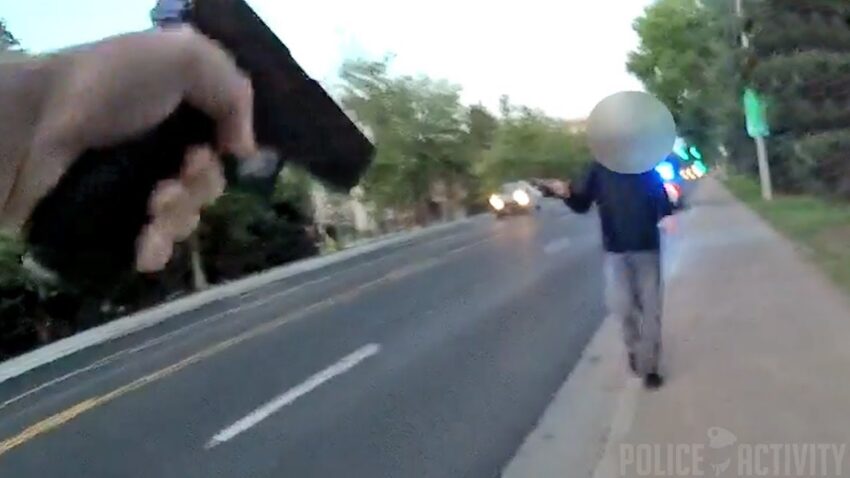 ** (Disclaimer: Video posted strictly for educational and information purposes only) **
Fort Collins Police asked Jeremy Holmes to drop the hunting knife he was holding more than 40 times before fatally shooting the 19-year-old man July 1 near the Colorado State University campus in Fort Collins, body camera footage released Tuesday shows. Police were alerted that Holmes was walking to his brother’s residence at the Aggie Village Apartments just south of CSU’s campus with a large knife by a 911 call from Holmes’ mother. The woman reported that Holmes had left the residence after saying he was going to kill his brother and sister-in-law, who lived at the Aggie Village Apartments, and that Jeremy Holmes had struggled with mental health issues in the past. The woman said to dispatchers that Holmes told her he planned to charge police and force them to shoot him, and he said she would “lose either one or two sons” that night. Officer Phil Morris with CSU police responded to the area of Whitcomb Street and Prospect Road, where he saw Holmes holding a large knife. In the video, Morris pulled out his patrol pistol and immediately began instructing Holmes to drop the knife, and backed away from Holmes as he continued walking toward the officer.

Holmes refused to drop the knife, and uttered phrases such as, “Kill me now,” and, “My life is over.” Fort Collins police Officer Erin Mast was responding to a different call, but saw Morris with his weapon drawn as she drove on Prospect with her lights flashing. She stopped and tried to assist Morris, pulling out her firearm and also pleading with Holmes to drop the knife. With Mast’s cover, Morris can be heard saying he is going to try shooting Holmes with a Taser, but as he goes to pull the Taser, Holmes charges Morris with the knife. Morris redrew his gun and fired four times at Holmes, and Mast also fired twice, with all six rounds hitting Holmes, according to Jones. Both Holmes’ mother and brother have seen the body-camera footage, Jones said. “I think the officers have certain tools that are available to them, and some are less lethal and some are not,” Harris said. “In this case the officer made a decision to try and transition to that less lethal option, and I’m not going to sit here and second-guess him. If it had worked, it would have been a great day for everybody.”