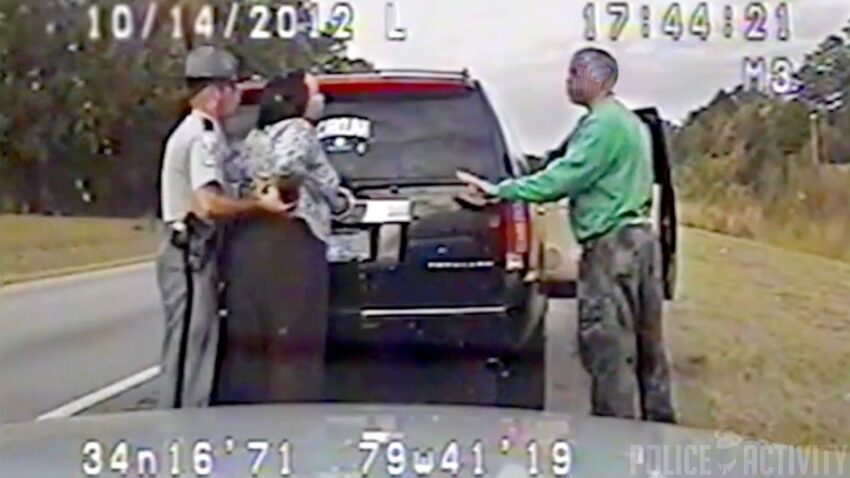 ** (Disclaimer: This video content is intended for educational and informational purposes only) **
A Charleston jury on Wednesday reached a $1.3 million verdict for a couple who said they were arrested because they accused a white state trooper of racial profiling during a 2012 traffic stop. The judgment ended a three-day trial in the civil rights lawsuit by Catherine and Jerome Newkirk, who were pulled over for speeding by Trooper James Enzor in Florence County. The Newkirks alleged that the trooper had used excessive force in wrongfully arresting them. Both spent more than a day in jail, but neither was permanently injured. Much of their ordeal, though, was captured on the lawman’s in-car camera. “That was invaluable for the jury to see,” Joe McCulloch, an attorney for the Newkirks, said shortly after the jury’s finding was announced in downtown U.S. District Court. “It was very persuasive. The jury was asked to send a message, and they did.”

A request for comment from Enzor’s lawyer, Samuel Arthur III of Florence, was not immediately returned. The S.C. Department of Public Safety, the umbrella agency for the Highway Patrol, also was sued but settled with the Newkirks late last week for $100,000. The verdict allows the couple’s lawyers to petition for a separate award of attorneys fees. U.S. District Judge Richard Gergel likely will weigh that request in coming weeks, but it could lift the state’s financial toll to $2 million, McCulloch said. Enzor was later fired over comments he made to a co-worker about his agency’s director. Those words also were caught on video.

But the civil rights suit stemmed from his run-in on Oct. 14, 2012, when he stopped Catherine Newkirk, who was traveling home with her husband after visiting their son in Jacksonville. Enzor alleged she was driving 77 mph in a 55-mph construction zone on Interstate 95. The trooper gave Catherine Newkirk a ticket, for 64 mph instead of 77. She insisted, though, that she had not been speeding at all. “I think there is a bit of discrimination going on here,” she said, according to court documents. Enzor ordered her out of the SUV. A discussion, mostly inaudible in the video footage, followed. “Let me tell you something right now,” the trooper is heard saying at one point. “No,” she said. Enzor then said Catherine Newkirk was under arrest, but she kept her arms at her side. The trooper got behind her and pinned her against the car.

That hurt, she exclaimed as the trooper tried to handcuff her. Enzor was still struggling when Jerome Newkirk got out, expressing concern for his wife. “Get in the car,” the trooper yelled. Jerome Newkirk eventually got back in, but he poked his head out and shouted, “Ain’t no reason for that. … We’ll sue them.” He was arrested, too, and jailed on a charge of hindering a police officer. He was accused of coercing his wife to disobey the trooper. His wife was jailed on a count of resisting arrest. They sued first in state court, but with allegations of constitutional violations, the action was sent to federal court in June 2013. Nearly four years of legal wrangling followed, but the litigation survived the “long, hard haul,” McCulloch said.

Most recently, in January, an appeals court denied Enzor’s request to dismiss the case under the “qualified immunity” doctrine, a legal concept that says officials cannot be held liable for conduct they shouldn’t be expected to know is unconstitutional. The ruling pushed the case to trial Monday morning. By 6 p.m. Wednesday, the jury had awarded $325,000 to Jerome Newkirk and $1 million to his wife. Dick Harpootlian, another Columbia-based attorney for the couple, called the verdict significant because nobody was shot, beaten or killed. “It’s not about the money,” he said. “It’s about holding people accountable.”