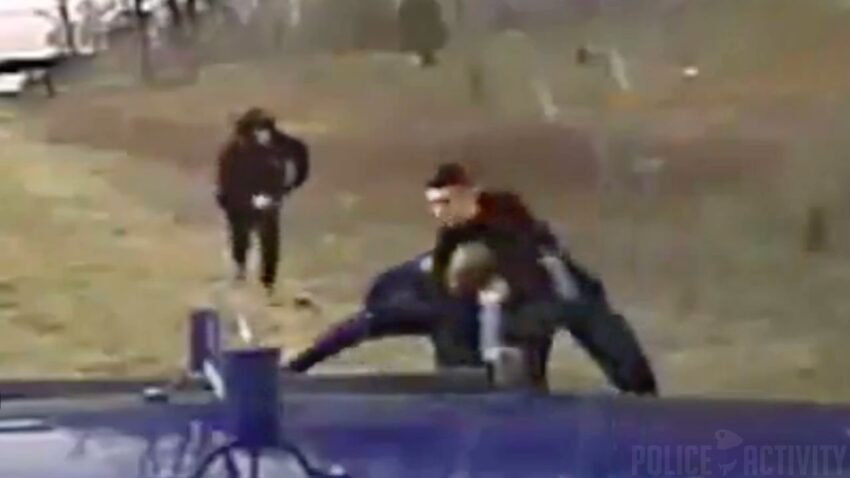 ** (Disclaimer: This video content is intended for educational and informational purposes only) **
On Monday, dramatic dashcam video was released of a police chase in Berrien Township that ended with a Michigan state trooper being attacked last month. The full clip runs just under 50 minutes and shows the remarkable account of what happened the morning of February 20. Two men, 21-year-old Michael Barber and his 19-year-old brother, Travis Wise were arrested for attacking Trooper Garry Guild. Both men face multiple charges, including assault and resisting an officer. The dashcam video starts at 8:40 a.m. In the video, you’ll see Michael Barber speed past. He’s riding a stolen motorcycle on U.S. 31 near Matthew Road. Michigan State Trooper Garry Guild attempts to stop him. Barber slows down and pulls off to the right in what appears to be a surrender; however, he then he speeds up and re-enters the freeway. Guild’s sirens and lights flip on and the chase continues. Cut to 8:43 a.m. and Barber still has not stopped.

He heads up the exit ramp then breaks left across a median and crashes. You can hear Trooper Garry Guild yell, “he crashed, he crashed.” Barber gets up but ignores Guild’s commands to get on the ground and a struggle ensues. The trooper tries to gain control of the driver, but soon another vehicle pulls up. Barber’s brother, Travis Wise runs toward the scene and puts the officer in a chokehold. Meantime, Barber tries to grab Guild’s weapon. Around 8:44 a.m., two Good Samaritans pull over and run to Guild’s rescue. Both Barber and Wise were arrested at the scene. They face numerous charges, with Assault Strangulation carrying the most weight at 10 years if found guilty. The remainder of the dashcam video shows other MSP officers arrive along with an ambulance. Officers speak with both men who witnessed the attack and helped Guild, in what otherwise could have turned deadly.