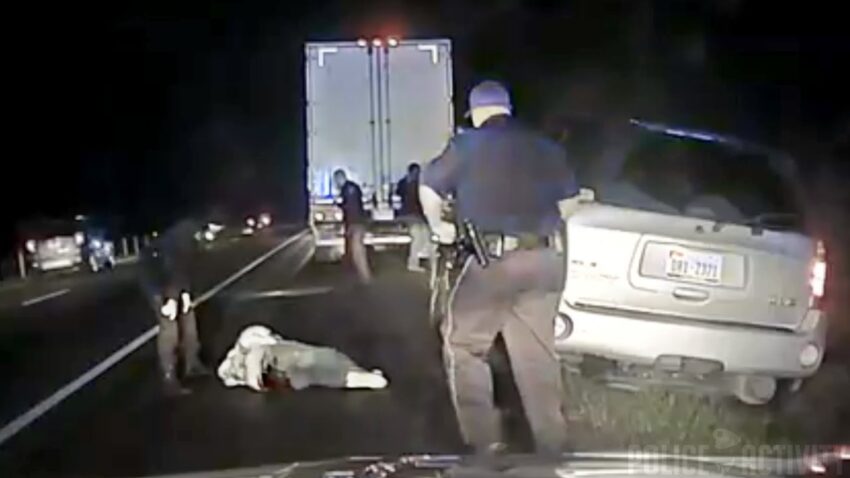 ** (Disclaimer: Video posted strictly for educational and information purposes only) **
A little more than three years to the date, the dashcam video of Airman Michael Edwards being shot by Opelika police officer Phillip Hancock on Interstate 85 has now been released to the public. A call came into the Opelika Police Department on the night of March 6, 2014 about an erratic driver on Interstate 85. Officer Phillip Hancock responded to the call. Davidson got into a minor accident with a tractor trailer where Davidson swiped the back of the tractor trailer. The tractor trailer and Davidson pulled over on the side of the road to exchange information. Officer Hancock arrives on the scene and pulled up behind Davidson’s car and had his headlights and spotlight on the vehicle and exits his vehicle. One of Davidson’s attorney’s, Brian Mosholder said that his client was parked on a downslope, which made it difficult for him to get the door open.

Mosholder said that Davidson’s wallet was in his left hand while pushing against the door to get it open, and then he reached back with his right hand. Soon after, Ofc. Hancock asks Davidson to show him his hands. Davidson brings his right hand through and up to his left hand, turned and got out of the vehicle as quickly as he could and put his hands out in front of him with his wallet in both hands and began to raise his hands. Soon after, the first shot is fired, which hits the ground. Then, Mosholder said Davidson’s hands went up and the second shot was fired, which hit Davidson. “It’s very obvious from that part of the video that Officer Hancock is creating a situation that he wished had happened that would have justified this shooting,” Mosholder said. “When you look at the video, none of that happened. When you look at the video, in less than six seconds, from the time Michael Davidson opens his door, Officer Hancock shoots him, and he shoots him for absolutely no reason.”

The United States Court of Appeals for the Eleventh Circuit affirmed the judgment of the Southern District Court of Iowa in that the use of force by Ofc. Hancock was reasonable. However, they did call the shooting a disastrous mistake, but that the position of Davidson’s wallet and hands right before the shooting meant that the mistake did not violate Davidson’s constitutional rights. Mosholder said that his client is back home in Texas in the process of completing community college, while working part-time jobs and taking care of his mother. He added that his client wanted folks to see the video. Mosholder said that Davidson feels as if he as been blamed for what happened, and that this video would vindicate Davidson. Mosholder said that they will discuss with Davidson whether or not they will appeal the case to the U.S. Supreme Court.

We took the video to our crime expert, Ricky Holder. When he watched the video, he said that it was a difficult situation for everyone involved. “I can see where this individual and his family are very upset about this,” Holder said. “I can understand that. I can also understand where this officer comes from; his training and he’s trying to protect his own life. It’s a tough situation. It’s hard on everyone involved.” We reached out to Opelika Police Chief, John McEachern and Opelika Mayor, Gary Fuller, to discuss the case. They said due to the case still remaining in litigation, they were advised not to discuss it by attorneys.