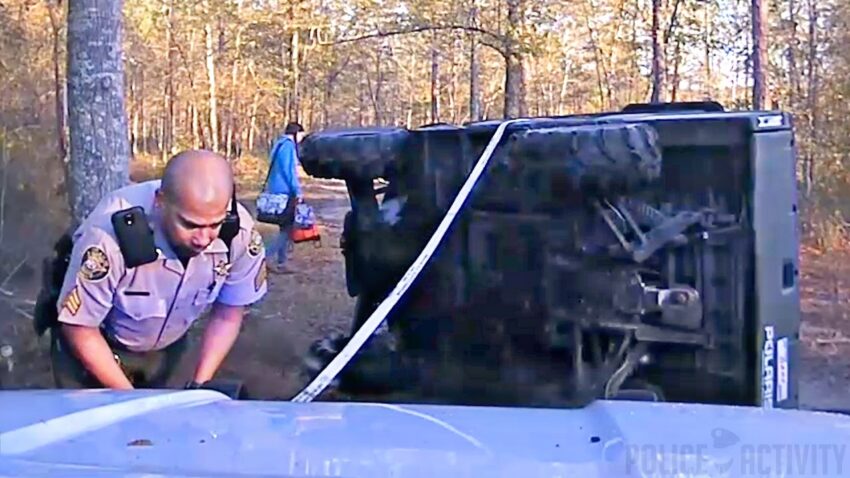 ** (Disclaimer: This video content is intended for educational and informational purposes only) **
A 10-year-old boy was lying face down in the dirt. The top bar of a flipped ATV was pressing the back of his neck. Hundreds of pounds of metal were pressing the life out of him. He was turning blue. Now, that 10-year-old boy is at home with a few bruises and scratches. The moments between then and now were captured by dash cam video. Sgt. Rey Rodriguez was patrolling along I-16 when a call came through the Bulloch County Sheriff’s Office reporting a traffic accident on private property. When Rodriguez pulled up, he saw an ATV tipped on its side. Video captures the moment he comes around the side and realizes a boy is trapped beneath. “I need help here now,” he called into dispatch as he maneuvered his patrol car closer to the ATV. He grabbed a tow rope, attached it to the ATV, and pulled it free. Rodriguex rushed out of the patrol car to check on the boy. Moments later, an ambulance arrived. The boy was air-lifted to a hospital in Savannah. “I think he either saved his life, or saved him from life-long injuries,” Chief Deputy Jarad Akins said.

Akins said the tow strap isn’t standard equipment for deputies, but says Rodriguez isn’t standard either. He’s an active Army Reservist and has received accommodations before for his heroic actions while on the force. He’s been nominated for Georgia Deputy of the year. And yet, “He’s a really humble guy,” Akins said. Rodriguez said he did what any deputy would do in that situation. “Instead of panicking, he did what he could do,” Akins said. Those moments when law enforcement officers are using whatever tools they have to make quick decisions, are happening every day, Akins said. “There’s nothing routine about this job. I don’t know if there ever was, but certainly not today,” Akins said. “Things like that, they happen all the time, way more often than they show up on the news.”