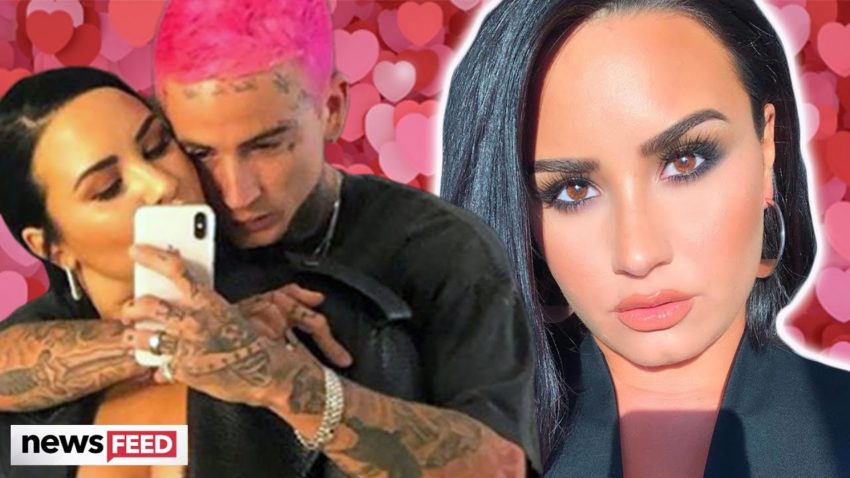 Some celebrities wait a long time before introducing their significant other to the world of social media. Some remain in secret for their whole relationship! But other celebs, well, they take that iphone camera out very early on.Once the floodgates are opened, the photo ops never seem to stop. What’s up guys it’s Emile Ennis Jr here with Clevver News and by the looks of it, Demi seems to have found herself a new man.And it’s all out for display on Instagram, where both she and her potential new boyfriend posted photos of each other.Demi, who is currently filming her cameo in the final season of Will and Grace, took time while in her dressing room to post a photo to Instagram.And he reciprocated the favor on his own instagram around the same time on Tuesday evening.Soooo it looks like things might actually be pretty serious between them. I wouldn’t call someone “my love” on social media unless it was the real deal. And the two different photos mean that they’ve seen each other at least a few times. So now I guess the only thing left to say is:Well, he’s a model of course! He’s done campaigns for brands like Baxter, And he’s been in local Los Angeles magazines like LA Canvas magazine.But Austin isn’t just any model. He’s a model with a famous dad. Austin’s father, George Wilson, was a part of the legendary west coast skateboarding crew, “The Dogtown Z-Boys”.He’s posted his admiration for his dad multiple times on Instagram, sharing old photos of him in his hay day.Now, George is a denim designer who started the brand “Rivi” based in Los Angeles.George has absolutely still got it. And yes, he has his son Austin model some of his new designs.Among Austin’s posts about his dad, he has hailed him for being over 30 years sober. Which is a great sign for Demi, who has struggled with remaining sober as well. She was recently linked to her sober companion, Henri Alexander Levi.Things ultimately did not work out for them, and the two ended any romantic relationship they had within just a few months. A source close to the situation said that “Demi is not focused on dating. Demi is very focused on her health.”

But that was almost a full year ago now, so maybe Demi is ready to get back in the dating pool while still being very focused on her health. And having good, sober people around who care for her, is a great way to do that. After her fling with Henri, Demi was also most recently linked to a Bachelor star, Mike Johnson.Demi HARDCORE thirsted after him while he was on Hannah Brown’s season of the Bachelorette, and apparently the feleing was mutual because it was later reported that the two had gone on multiple dates.He described her kissing abilities on fellow Bachelor franchise alumnis Ben Higgins and Ashley Iaconetti’s “Almost Famous” podcast.Well we know that Demi’s new boo will also like Demi’s tattoos, since he is covered head to toe in them.

The 25 year old showed off a good portion of his tattoos, and his dog, on his latest instagram story, posted shortly after his heart pic with Demi.We’re not certain how – or when – the two officially met. But we know that they run in similar circles of friends.They were both friends with Thomas Trussell III, who passed away last month from an accidental overdose.They both paid tribute to their late friend on Instagram. That was just in early October, so it’s possible that Demi and Austin have been seeing each other since around that time. Though we didn’t see Austin in any of Demi’s multiple Halloween photos. I’m sure we’ll be getting more information from these two soon, but in the meantime let me know what you think about the couple in the comment section below. Do you think they’ll be good for each other? Have you heard of this man before? Sound off in the comments! And then make sure you subscribe to Clevver News so you can stay up to date on whatever is happening with this relationship and the many others that we’ll tell you all about!