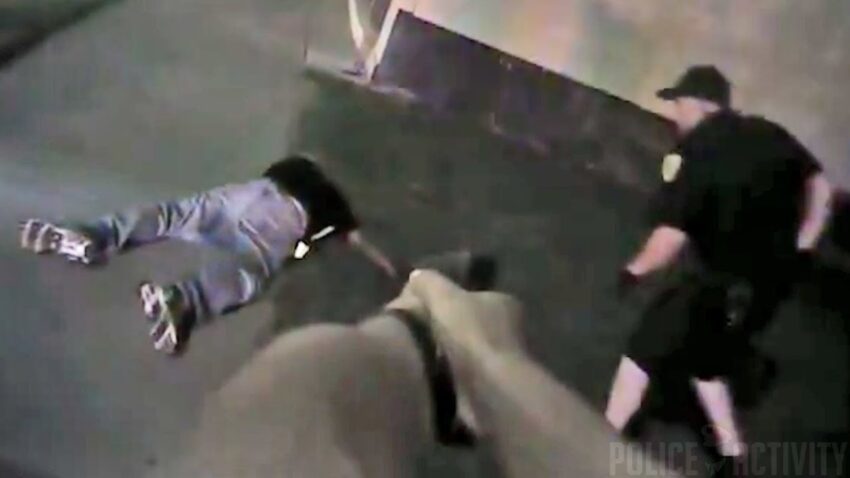 ** (Disclaimer: Video posted strictly for educational and information purposes only) **
Police in Utah fatally shot a man from behind while he was running away from officers, according to newly released footage. Prosecutors in Salt Lake City have said officers were justified in killing Patrick Harmon, 50, who was pulled over for riding a bicycle without a light and who attempted to flee when police tried to arrest him. Police are not facing charges despite the fact that the body-camera footage captured officer Clinton Fox shouting “I’ll fucking shoot you!” from a distance before he fired three bullets into Harmon, who was running in the opposite direction. “They just murdered him flat out,” Alisha Shaw, Harmon’s niece, told on Thursday after watching the footage. “They are lying. There is no way they were threatened by anything. He was only trying to get away.” Salt Lake officials have claimed that the killing of Harmon was legal because the officers feared for their lives. Another officer said he fired his Taser at the same time that Fox shot Harmon. The footage showed the officers handcuffing Harmon as he lay on the ground face-down, groaning in pain. The district attorney’s office claimed that Harmon said “I’ll cut you” and turned and faced officers with a knife as he was running.

The video, however, raises questions about the narrative. Harmon cannot be heard making that threat and was running away from the officer, not facing him, when he was killed. “He was scared. All he did was run,” said Adriane Harmon, another niece, who was sobbing after watching the footage for the first time Thursday. “It hurts … They said ‘I’m going to kill you’ and they shot him three times. He’s just moaning on the ground.” At the start of the video, Harmon appeared tearful and exasperated about police attempting to arrest him. According to prosecutors, officer Kris Smith pulled him over because he saw him “ride his bicycle across all six road lanes and a median” and he didn’t have a “required red rear tail light”. The officer said he wanted to “discuss the situation” with Harmon. The policeman eventually called for backup and determined that Harmon had an outstanding warrant for aggravated assault, according to prosecutors. Harmon appeared “emotional and distraught” and told police that he was trying to take care of his warrant, Fox testified.

Salt Lake City has previously received national praise for its “de-escalation” training, aimed at encouraging officers to communicate with people and limit confrontation and use of lethal force. The department even gives out “de-escalation awards” to recognize officers who rely on these tactics. The chief, Mike Brown, said in a statement: “We trust the process and support the decision from district attorney Sim Gill. I believe our officers have the training and judgement and ability to make split-second decisions in dynamic situations.” Gill added in a statement: “Officer Fox reasonably believed deadly force was necessary to prevent death or serious bodily injury to himself and/or others and therefore his use of deadly force was ‘justified’.” Antoinette Harmon, a 54-year-old sister, said the family grew up in St Louis, Missouri, but later moved to Utah, where they often experienced racism and prejudice. The family hadn’t seen Patrick Harmon for several years since a funeral for one of his brothers – a death that hit him hard, said Antoinette.