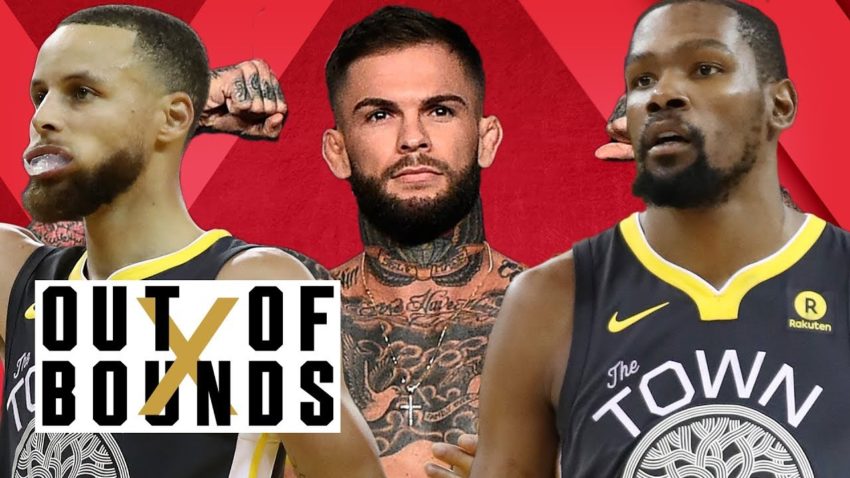 On today’s episode of #OutofBounds, former UFC champion Cody Garbrandt joins Gilbert Arenas, Adam Caparell, and Pierce Simpson to discuss his beloved Cavs losing Game 2 of the NBA Finals to fall into a 2-0 hole heading back to Cleveland. Despite Steph Curry scoring 33 points and making nine threes to set a NBA Finals record, Gil argues that the Warriors superstar is not the front runner to win the series MVP. Plus, Gil and Cody break down the problems with LeBron James’ supporting cast.

In “Fire Fit,” the panel rates the distinct Finals looks of LeBron and Nick Young. Are King James’ suit with shorts ensembles acceptable for basketball royalty? And did Swaggy P wear the wrong Golden State throwback in Oakland on Sunday?

Next, OOB reacts to Cavs players Rodney Hood and J.R. Smith recently saying that it’s difficult playing alongside a megastar like LeBron. Gil has some particularly strong words for both guys about their roles on the roster and their place in the lineup and league going forward. With the conversation turning to the necessity of putting in work and preparing to perform, Cody explains what goes into one of his fights.

Following an enlightening oral history of the Hamptons Five meeting, in which Kevin Durant revealed that he needed peer validation in free agency, the crew discusses what separates alpha males from betas in sports. Gil names the real Warriors alpha, as well as several superstars who were not alphas — including some that may surprise you.

In closing, Cody talks about what it’s like to kick and be kicked in an MMA fight, so you don’t have to find out for yourself.