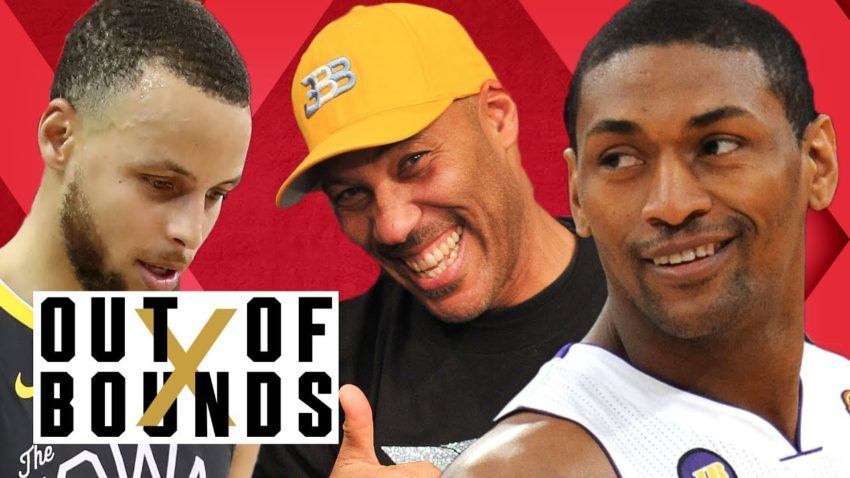 On today’s episode of #OutofBounds, 2010 NBA champion Metta World Peace (a.k.a. Ron Artest) joins Gilbert Arenas, Adam Caparell, and Pierce Simpson to discuss the Rockets’ surprise 95-92 win over the Warriors to even up the Western Conference Finals and reclaim home-court advantage. Gil and Metta break down what went wrong for Golden State in the game, as well as the problems that dominance has created for them. Plus, Gil points out what Klay Thompson needs to add to his game to help Golden State.

Looking ahead to Game 5 of the Eastern Conference Finals, the panel debates whether Boston will continue winning at home or if LeBron James and Cleveland will take command of the series on the road. Metta shares the story of how Phil Jackson got the most out of him before Gil reflects on having been scared to make mistakes when he was in Orlando. Plus, the crew reacts to King James tracking as the slowest player in the series — and his irritated response to that info — clarifying the kind of speed LeBron possesses and the kind that he does not.

Next, OOB discusses the NBA All-Rookie teams and unanimous selection of the 76ers’ Ben Simmons and Jazz’s Donovan Mitchell to the first team. Gil and Metta take issue with the Celtics’ Jayson Tatum not being a unanimous pick. Metta then shares his experience guarding rookie LeBron and the best game he ever had against him.

With LaVar Ball in the news again — this time because he said his sons will be billionaires before LeBron, and because ticket prices for his JBA league are absurdly high — the panel gives him a reality check. Metta has faith in the Big Baller Brand but Gil is hilariously skeptical.

After Metta’s former teammate Kobe Bryant responded to Kanye West’s infamous quote about slavery being a choice, the guys react and voice their own opinions. Was Kanye out of his damn mind or misunderstood? Gil and Metta explain how they avoid saying things they’ll regret when microphones and cameras are constantly in their faces. And when discussion turns to mental health in the NBA, they explain why players don’t talk openly to the sports psychologists made available to them.

Finally, Metta talks about his new book — No Malice: My Life in Basketball, or: How a Kid From Queensbridge Survived the Streets, the Brawls, and Himself to Become an NBA Champion — plus the pressure he felt while in the NBA and once his playing days were done, and his Knicks workout fail. Gil chimes in about the difficulty adjusting to life after the NBA and tells the story of the time Metta body-slammed him during a game.