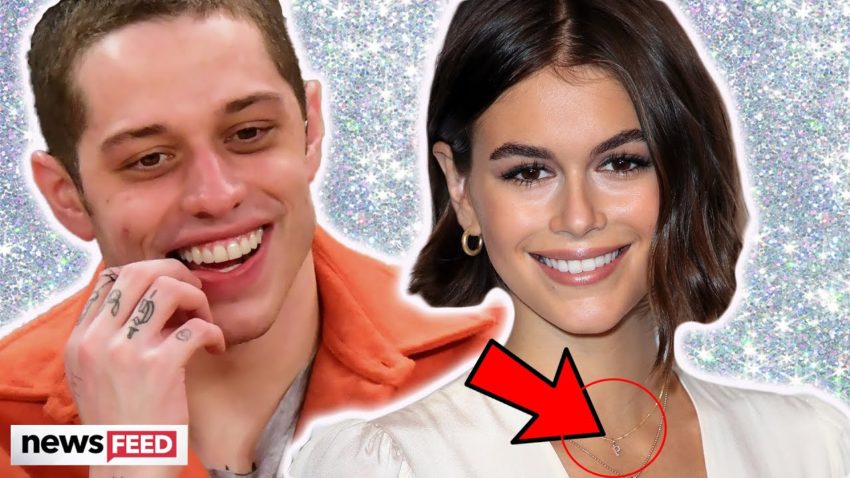 Late last month Pete Davidson was spotted hanging out with Kaia Gerber and now it looks like they may have taken another step in their relationship. What’s up guys? It’s Sussan Mourad here with Clevver News and it’s been about a year since Pete Davidson and Ariana Grande broke up and I can hardly keep track of who he’s dated since then.I’m sure there have also been flings we don’t know about.But since last year he’s had three public relationships.We’ve had Kate Beckinsale who he dated for four months, Margaret Qualley who he dated for two months, and now Cindy Crawford’s daughter, Kaia Gerber, who he just reportedly started dating.Late last month Kaia and Pete were spotted out having a meal together at Sadelle’s in the Soho neighborhood in New York City. And afterward the meal, according to an E! News source, Pete went to Kaia’s apartment where he, quote “stayed with her all night”.At first, we thought that maybe Kaia, who just turned 18, and Pete may just be friends.Just going to a meal with someone doesn’t mean you are dating I get that.And at the time, a source told Page Six that the two were “just friends”, so maybe they had a “just friends” sleepover. But now there are some new details that perhaps tell that they are maybe not just friends.Kaia was just spotted rocking a gold necklace with her rumored beaus first initial, or so it seems.On Wednesday, Kaia was at the Women’s Guild Cedars-Sinai Annual Luncheon at the Beverly Wilshire Hotel where she was seen wearing some new jewelry around her neck, a P necklace.

And my mind automatically goes to Pete because they’ve been spotted on 2 dates, that we know of, on 2 coasts over the past few weeks.Just this week, they were spotted together in Malibu driving home from Nobu in a G Wagon.Which made me ask a few questions like, did Pete fly across the country to visit Kaia? We all know he lives in New York because that’s where he films SNL and Kaia lives here in LA.Now, I don’t know about you, but THAT definitely sounds like a date.I get that the Sadelle’s meal could have just been a friendly lunch, but nothing about flying across the country for someone is just friendly.So we looked back on that pic of them at Sadelle’s in New York to see if she was wearing the necklace then.And if you look REALLY closely, it looks like Kaia was wearing one necklace that day.

According to TMZ, it’s not the P necklace though. It’s the one she was wearing WITH the P necklace yesterday.So maybe the P necklace was a gift from Pete that he gave her after their Nobu date?We decided to go through Kaia’s family to see who else the P could be for, if it isn’t for Pete.Kaia’s middle name is Jordan, her mom’s name is Cindy and her middle name is Ann, so nothing to see there. Her dad is named Rande and doesn’t have a middle name. None of her grandparent’s names start with the letter P.
The only person it could possibly be is her brother, Presley, and you know what, while it might seem unusual for some siblings to wear their other sibling’s initial on their neck, we know that Kaia and her bro are super close. They attend parties and events together, and he even picks her up from the airport with In-N-Out after a long haul flight from Paris Fashion Week, so you know, it’s totally possible that it could be a ‘P’ for Presley, her brother.But I think at this point, according to a number of fans, many think the most obvious answer is Pete.I guess only time will tell.However, fans aren’t exactly here for the whole Kaia and Pete relationship thing.They are taking to Twitter to share their thoughts.And I’m honestly not sure how to feel about it, but I will say, Kaia wouldn’t be the first celeb to rock an initial necklace of her beau.Sarah Hyland, who recently got engaged to her man Wells Adams, has been wearing a W necklace for a while now.Which, in case you aren’t in the know, is a Taylor Swift lyric.
In her song Call It Want You Want, Taylor sings quote, “I want to wear his initial / On a chain round my neck, chain round my neck / Not because he owns me”So clearly, Taylor is a fan of the initial necklace thing too.Maybe Pete is a fan of Taylor’s and was inspired by her song. Who knows.Either way, if Kaia is wearing the P necklace for Pete, that would definitely mean their relationship is headed in a more serious direction.I mean, after all, when it comes to buying jewelry, Pete doesn’t mess around.He got Ariana Grande a massive $93,000 dollar engagement ring after only a short time of dating.