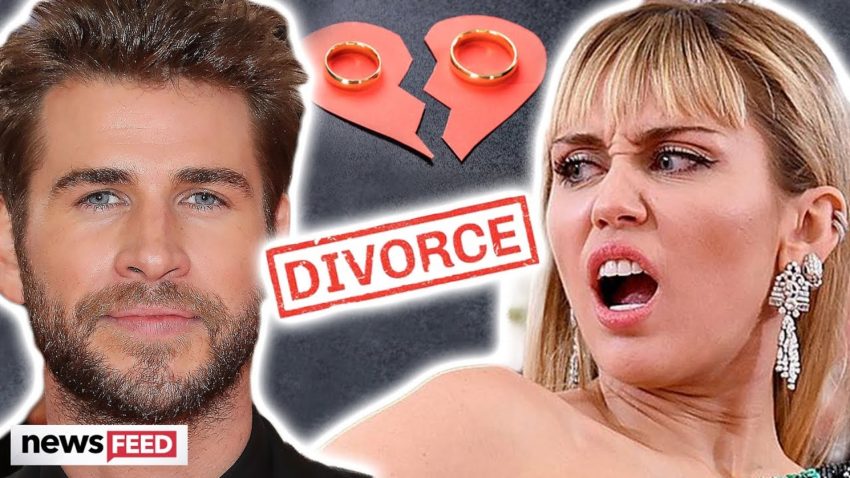 For those of you holding out hope that there’s still a chance that Liam Hemsworth and Miley Cyrus will reconcile, it looks like there is no HOPE AT ALL! Liam Hemsworth has just officially filed for divorce from Miley Cyrus!

What’s up? It’s Sussan Mourad here with Clevver News and it seems Miley and Liam are officially done for good, but that doesn’t mean their loved ones wanted a divorce to happen!

We all know that Miley and Liam announced their split on August 10 after about a decade together and eight months of marriage.

And since then the drama has continued to unfold. Miley has been spotted with her new love interest Kaitlynn Carter, Brody Jenner’s ex-wife, Liam has been spotted looking sad on the beach, and now sources close to their loved ones are speaking out about hope for a potential reconciliation.

I hate to be the bearer of bad news… but here is some awfully bad news!

Sources close to the couple say Liam and Miley did have a prenup in place, so a fight over money won’t be an issue.

You’ll remember there were many conflicting reports about what led them to separate.

If you’ve had a chance to listen to Miley’s new song “Slide Away” you know that the relationship wasn’t exactly working for her anymore.

Through her song she shared what she’s been going through post-breakup in an non-malicious way, but it didn’t seem like she is in any way ready to get back with Liam.

According to some sources, Miley tried to save the marriage but couldn’t cope with Liam’s alleged heavy drinking and drug use, but his team strongly denies these allegations.
On the contrary… sources close to Liam say he is quote “over the marriage and just wants to move on.”

So we may never know what really caused the split, and their families were still holding onto some sliver hope, but clearly that sliver is gone!

A source told Us Weekly quote, “Miley’s and Liam’s families are encouraging them not to make any quick moves when it comes to officially divorcing. They are hoping they can work things out.”

When news of the split hit headlines a rep for Miley also said quote, “Ever-evolving, changing as partners and individuals, they have decided this is what’s best while they both focus on themselves and careers. They still remain dedicated parents to all of their animals they share while lovingly taking this time apart.”

And fans on Twitter really want Miley and Liam to give it another shot.

One person said quote, “I feel like these two should have one more go around. They have been through a lot and basically grown up together.”

And another said quote, “I hope they make it work I really do.”

Not everyone is pushing a reconciliation though.

Miley’s sister Brandi Cyrus spoke out on her podcast, “Your Favorite Thing”, and said quote, “There’s nothing I can really say. I just, I’m here for her, obviously, and I’ve been spending a lot of time with her. When she’s ready to talk about it or whatever, then she will.”

And Miley’s mom Tish was also recently spotted out at lunch with Miley and her new fling, Kaitlynn. That was only days before reports surfaced of Miley and Kaitlynn packing on wild PDA at exclusive members club “Soho House” in West Hollywood. A source revealed they were allegedly all over each other, making out all over the place and looking very much together. This was also just hours after Miley dropped “Slide Away.”
A source also told People quote, “Miley doesn’t talk about Liam much and is not dwelling in the past. She doesn’t want to hide, and her mood has changed drastically. She seems much more relaxed and happy.”

I want to know what you guys think about all of this though.

What do you think of Liam filing for divorce? Is there any chance in the world these two may make it back into each other’s arms???

Alright and before you “Slide Away” – slide on over and hit that subscribe button. Also hit the bell so you stay in the loop as soon as we post. And catch up on all things entertainment right over here. Thanks for watching I’m Sussan Mourad and I’ll see you next time.