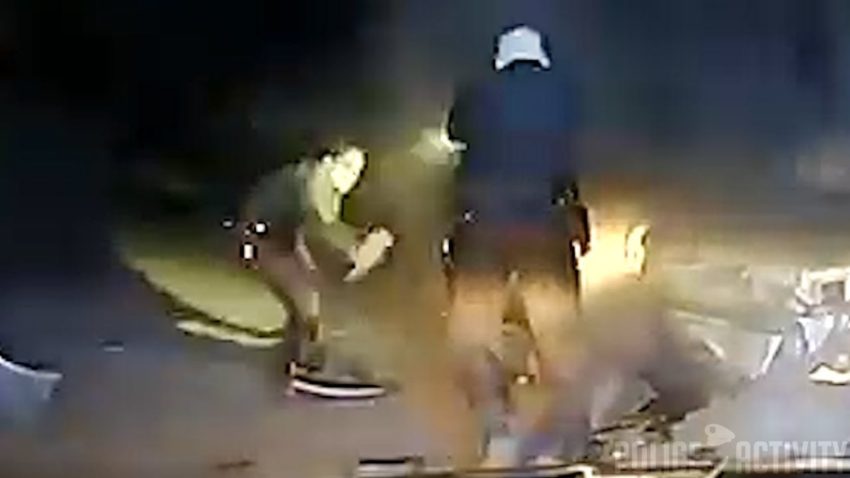 ** (Disclaimer: This video content is intended for educational and informational purposes only) **
A man fled from police, crashed his car, then was fatally shot after attacking an officer in Rabun County this week, authorities said. The chase and shooting were caught on dash cam video which was released by the Clayton Police Department on Friday. Clayton Police Chief Andy Strait said the officer, who has not yet been identified, attempted to pull over a vehicle along Highway 441 for doing 68 in a 45 mph zone. Instead of pulling over, the driver turned off on a side street, blew through an intersection, caught air on a curve, and crashed in the driveway of Mountain View Health and Rehab. The video shows the officer arriving at the scene of the crash. The car was smoking and the side airbags can be seen fully deployed. The officer struggled to see the man inside, who appeared to him to have been crawling into the back seat. Eventually, the man emerged, having kicked out the back window. The man then climbed on top of the vehicle. With something apparently in his hand, he lunged at the officer and fell face down on the ground.

The officer commanded the man to stay down, but the suspect then got upholding that same object, which was later determined by investigators to be a knife. He came toward the officer, slashing and stabbing at him, as the officer slowly backed away. “At one point, he was able to kick the back window out of the vehicle, climb onto the roof with a knife and dive at the officer on the ground. Officer is continually giving him verbal commands, ‘stop or I’ll shoot,’ and the suspect says ‘I don’t care’ at one point, continues at the officer in a slashing motion, stabbing motion, within less than a foot and the officer was forced to shoot. And unfortunately, the suspect was deceased at the scene,” Chief Strait said. Several shots could be heard before the man was seen falling to the ground. The officer then called in “shots fired” to dispatchers. The video shows the officer holding the man at gunpoint until backup arrived.

Those officers checked the car for other occupants before turning their attention to the medical needs of the suspect. The officer, a Marine veteran, then helped the other officers tend to the wounds of the suspect he had just shot. He relayed information about the suspect’s wounds to dispatch so medics would be ready to assist when they arrived at the scene. Despite their best efforts, the man died from his injuries. Chief Strait said he called in the Georgia Bureau of Investigation to oversee the investigation into the officer-involved shooting. “We always want an outside source. And the GBI came in, of course, did our investigation for us. And they’re the lead investigation [sic] on this,” the chief said. The names of the suspect and the officer have not yet been released. “Our thoughts and prayers are for everyone involved in this situation. It’s truly a very sad situation,” the chief said. No motive has been given for the man’s behavior, why he fled from police or decided to attack the officer.