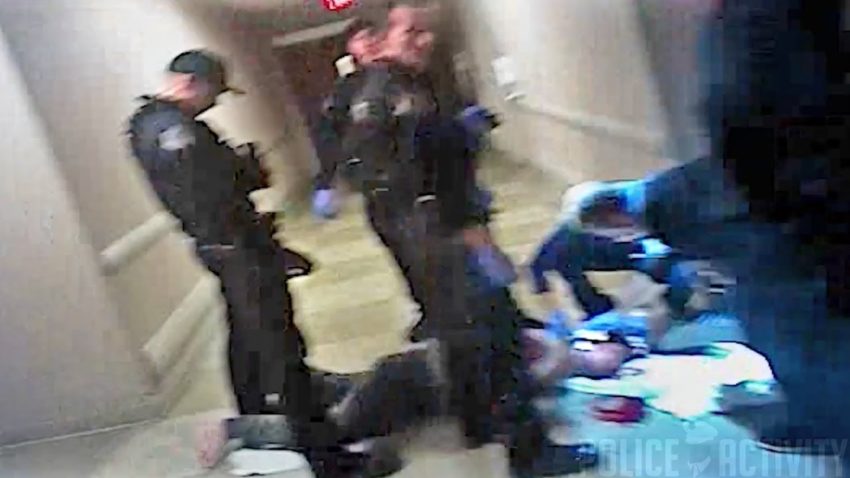 ** (Disclaimer: This video content is intended for educational and informational purposes only) **
Newly-released body camera video of a January arrest appears to show a Mesa police officer punching a suspect during a struggle and later mocking the man while he is on the ground and bloody at the hospital. The incident is the latest in a string of confrontations between Mesa officers and suspects that earlier this month prompted an investigation into the department’s use-of-force policies. The January 28 incident reportedly started when police pulled over a driver for suspected DUI near Baseline and Sossaman roads. According to police documents, a Mesa officer believed the passenger, Jose Conde, was acting suspiciously, so he had the 23-year-old exit the vehicle for a pat down. Police say Conde resisted arrest and got into a scuffle with officers after something was found in his sock. Three small plastic baggies found in the sock were later discovered to contain cocaine, reports indicate. Body camera video obtained from Conde’s attorney appears to show several punches being thrown by a Mesa officer, as others tried to handcuff Conde. According to another officer’s report, the 23-year-old “continued to kick and flail” and “refused to follow commands” prompting crews to “take him to the ground.”

The officer said Conde tried to punch officers and grabbed toward officers’ body armor during the struggle. According to the officer, at one point, Conde hit a brick wall after losing his balance during the struggle. Once in custody, Conde was taken to the hospital for his injuries. Paperwork shows Conde attempted to escape custody at the hospital while being treated and was apprehended by an officer while he tried to run down a hallway. Nurses led another officer to the suspect after he had been taken back into custody inside the hospital. The nurse explained that Conde resisted arrest and was bleeding heavily from his face after being taken to the ground. The officer can be heard on body camera footage saying, “Bless his little heart,” in response to the nurse’s description of events. Once in the same room as Conde, the officer says, “Aww,” and tells the suspect to “man up” while he is laying on the floor. According to court paperwork, Conde had a previous history with police to include a firearm violation and drug violations.

The Mesa Police Department released the following statement in response to the video: “We have not received a complaint nor do we currently have an internal investigation concerning this incident. Based on your inquiry we are researching the incident.” Conde is facing charges for resisting arrest, possession of a narcotic drug, possession of a narcotic for sale, and second degree escape-felony in custody in the January incident. The release of the January body camera footage comes on the heels of two May incidents that Mesa Chief of Police Ramon Batista has called “disturbing”. Seven officers have been placed on leave as the department launches investigations into the incidents. Five officers were placed on administrative leave in connection with the May 23 arrest of Robert Johnson outside a Mesa apartment complex. Surveillance video from the altercation showed officers beating the 33-year-old though he did not appear to be resisting or attacking police. In the May 17 arrest of a 15-year-old armed robbery suspect, surveillance video showed an officer grabbing the teen’s jaw as he exchanged profane language with police. “The actions shown on that video and others recently released do not reflect the values of the Mesa Police Department,” Chief Ramon Batista said at a Friday afternoon press conference. “I promise you, we will fix this.”