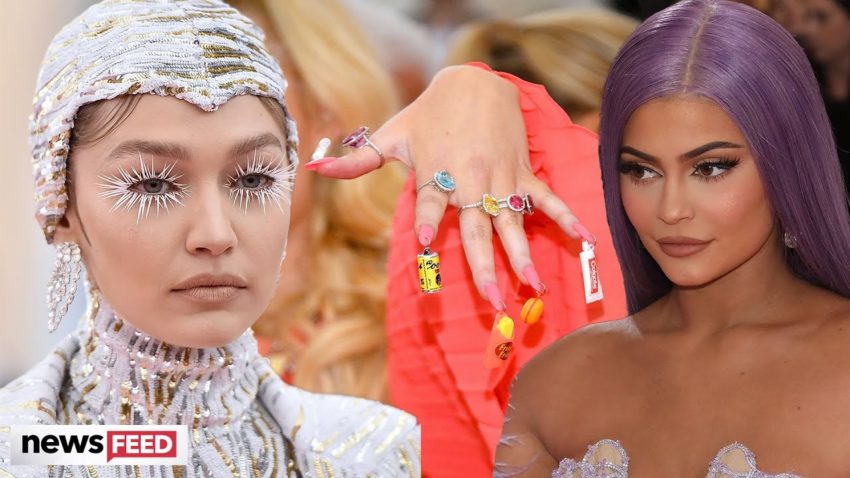 Yesterday was the first Monday in May and you know what that means? Met Gala! And while it’s the super bowl for fashion, the beauty trends were the real winner of the night.

What’s up guys? It’s Emile Ennis Jr. here with Clevver News and we’re breaking down all the most outrageous beauty moments from fashion’s biggest night.

Let’s start with lashes. Because this year there were lashes for DAYS.

And these aren’t your mother’s glue on fake eyelashes.

Please use caution when trying lashes like these at home.

While Lady Gaga made her theatrical 10 minute entrance, we were busy swooning over her razor sharp gold eyelashes.

You didn’t think the queen of camp fashion was going to disappoint did you?

Mother Monster showed up to slay.

And Gaga wasn’t the only one rocking some seriously dramatic lashes.

Like we know Gigi always absolutely kills it on the Met Gala carpet, but this look is out of this world.

Because what’s a camp theme without some wigs to be snatched?

Like Gigi, Kylie Jenner went head to toe in one color, but she chose purple.

This included her waist-length wig and millions,

yes, literally millions of feathers on her gown.

If you weren’t on Team Kylie before, it’s officially time to jump on the bandwagon.

Bow down to queen Kylie.

And we can’t talk about colored wigs without mentioning Nicki Minaj’s blonde to pink ombre hair.

We can always count on Nicki to slay, and that’s exactly what she did.

We were so here for this pretty in pink moment.

I mean she is Barbie after all right?

Finally, we’ve got to talk nails.

And the winner of best manicure of the night goes to Elle Fanning without a doubt.

There is literally nothing more campy than Elle’s nails fully equipped with dangling charms.

The charms included french fries, a turquoise phone, a Bubble Yum package, a Coors can, and even a tube of toothpaste.

Can you say dream manicure?

But it wasn’t only the ladies rocking fresh nail polish last night.

Harry Styles stole the show on the red carpet and the Internet was freaking out over his multicolored nail polish.

Fans praised Harry for his red carpet look, applauding him for breaking gender norms and pushing boundaries with his beauty choices.

So it really looks like there was no such thing as over the top at this year’s met. More was definitely more.

Alright guys, it’s time to hear from you! Which beauty trend was your favorite? Would you try any of these out yourself? Let us know all your thoughts in the comment section below and hit me up on Instagram, Twitter and YouTube @emileennisjr. After that click right over here to watch another new video and don’t forget to subscribe to our channel and click that bell to get notified whenever we post. Thanks for watching and I’ll see you soon.