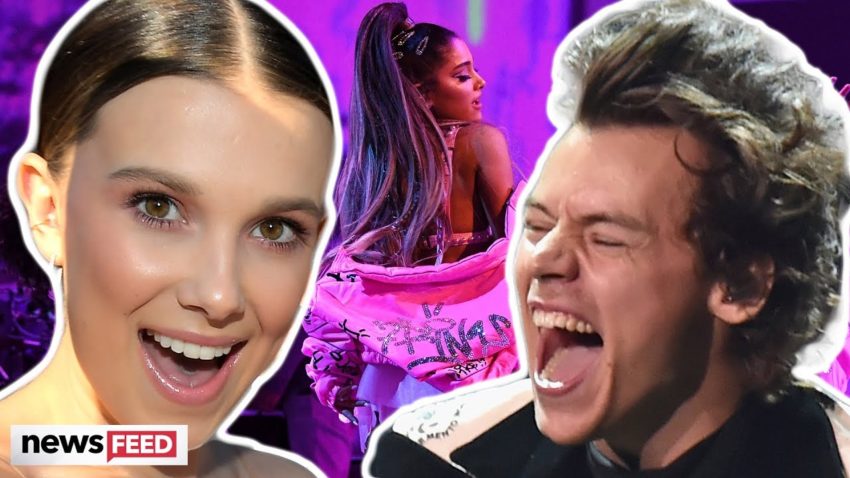 Dang, Millie Bobby Brown and Harry Styles were spotted together letting loose! Is this some sort of collaboration in the making?!?

Harry and Millie attended Ari’s concert in the UK the other night and let’s just say we are seriously #blessed with the videos.

I am just feeling all kinds of good vibes from that video.

And in case you somehow missed it, our fave Millie Bobby Brown was also there tearing up the dancefloor with Harry! Living their best lives (and us living ours just watching these 2), the two ultra mega stars were seen chatting it up in the VIP section.

I’m also secretly hoping they were talking about all that Harry Styles and “The Little Mermaid” drama. You know, one second he’s confirmed for Prince Eric and the next he’s not? Our hearts still haven’t recovered from our hopes being crushed last week.

Okay, okay rant over but seriously, where’s our Prince Eric at?

Fans were obviously excited about the encounter, I mean, it IS Harry Styles and Millie Bobby Brown at an Ariana Grande concert!

“Ariana grande was truly incredible but what topped my night was @Harry_Styles going ape shit dancing in the VIP.”

While one fan expressed what we all our secretly feeling right now,

“Millie is living the dreams I’ve always wanted and that is hanging out with Harry styles at an Ariana grande concert.”

What do you think about this these 2 rocking out at Ari’s concert together? Also what do you think is Harry’s & Millie talked about if anything? Let’s chat about it in the comments below.

Also while you’re there break free some dance moves of your own while clicking the subscribe button and ringing the bell to stay up to date with all the celebrity news you’ve been dying to hear. I’m Sussan with Clevver News and I’ll catch you next time!