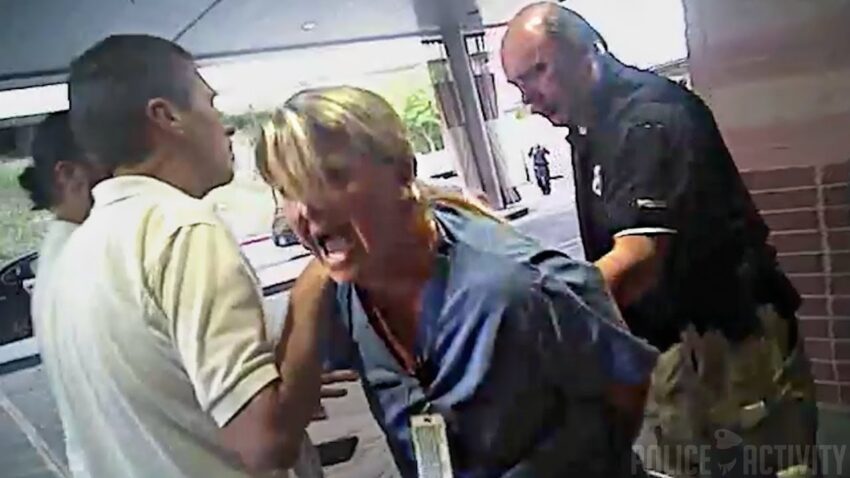 ** (Disclaimer: Video posted strictly for educational and information purposes only) **
A nurse alleges she was assaulted and illegally arrested by a Salt Lake City police detective for following a hospital policy that does not allow blood draws from unconscious patients. Footage from University Hospital and officer body cameras shows Detective Jeff Payne insisting to nurse Alex Wubbels that he be allowed to get a blood sample from a patient in the burn unit who had been injured in a July 26 collision in northern Utah that left another driver dead. Wubbels responded that blood cannot be taken from an unconscious patient unless the patient is under arrest, there is a warrant allowing the draw or the patient consents. The detective acknowledges that none of those requirements is in place but insists he has the authority to obtain the draw, according to the footage. At one point, Payne says, “She’s going to jail,” if he doesn’t get the sample. After Wubbels consults with several hospital officials and repeats the policy, Payne tells her she is under arrest and grabs her, pulling her arms behind her back and handcuffing her. The footage shows the detective dragging her out of the hospital and putting her inside a patrol car as she screams.

Parts of the footage were shown Thursday at a news conference at the office of Karra Porter, a Salt Lake City attorney representing Wubbels. Salt Lake City police Sgt. Brandon Shearer said the department started an internal investigation, which is ongoing, in response to the incident. Payne was temporarily suspended from the department’s blood-draw program — where officers are trained as phlebotomists so they can get blood samples — but remains on duty, Shearer said. The department also has held training for the officers in the program, he said. In a written report, Payne said he was responding to a request from another police department to get the blood sample, to determine if the patient had any chemical substances in his system at the time of the crash. Payne explained the “exigent circumstances and implied consent law” to Wubbels, but she said “her police won’t allow me to obtain the blood sample without a warrant,” his report says.

Payne said he was advised by the watch commander on duty that night to arrest Wobbles for interfering with a police investigation if she refused to let him get the sample. Porter said Wubbels’ No. 1 concern is to prevent a recurrence of what happened to her. There have been discussions of the matter with Salt Lake City Police Department about educating officers, but Porter said but no claim or lawsuit had been filed. Wubbels, 41, who was at the news conference, has watched the footage four or five times and said that “it hurts to relive it.” She never said “no” when Payne asked to take a blood sample, but merely explained the blood draw policy to him, according to Wubbels, who also said she was trying to keep her patient safe and do things the right way. Logan police had requested the blood sample, according to what was said on the footage. Porter stressed that the unconscious patient was always considered the victim in the crash.

Porter and Wubbels declined to give any information on the patient, including gender, but Payne’s report identifies him as 43-year-old William Gray, a reserve officer in the Rigby, Idaho, police department, who suffered burns during a July 26 crash in Cache County. Gray is a truck driver when he is not serving as a reserve police officer, according to the Idaho State Journal. At about 2 p.m. on July 26, Gray was driving a semi north on State Road 89/91 near Sardine Canyon when a man fleeing from the Utah Highway Patrol crashed a pickup truck head-on into him, according to Logan police, who investigated the crash. The crash caused an explosion and fire, Logan police have said. Gray was on fire when he exited the semi. The driver of the pickup truck, Marcos Torres, 26, died at the scene. Police have said Torres was fleeing from the UHP after other drivers reported him driving recklessly. On Thursday, Gray was in serious condition at University Hospital, officials there said.