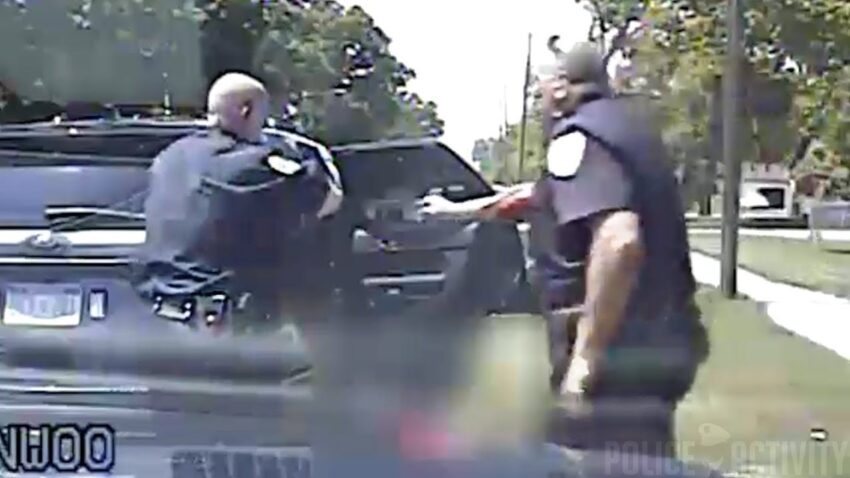 ** (Disclaimer: Video posted strictly for educational and information purposes only) **
After reviewing evidence and items in an investigation of an officer-involved shooting that left one man dead and another officer shot, the Saginaw County Prosecutor’s Office has found no criminal wrongdoing occurred. On Wednesday, Aug. 23, dash-cam video of the events leading up to the shooting was released by the prosecutor’s office. A police officer in Saginaw Township just after 1:30 p.m. on July 19, arrested Farhad Jabbari on West Michigan near Leo on suspicion of operating a motor vehicle while intoxicated. The officer, who has not been named, administered field sobriety tests and a preliminary test on Jabbari, according to the prosecutor’s office. After the officer placed the Jabbari in the back seat of his patrol vehicle, the officer noticed that Jabbari was tampering with his handcuffs, freeing one hand from restraint, according to the prosecutor’s office. In a video released by the prosecutor’s office, the officer could be heard asking “What are you doing?” before exiting the driver’s side and going to the rear drivers side door of the police vehicle. During the same time, before the officer enters the back seat, the vehicle began to move as if there was a commotion in the back seat. The back-passenger side door could be seen recoiling from some sort of impact from inside of the vehicle.

According to the prosecutor’s office, when the officer entered the vehicle to restrain Jabbari, he was immediately attacked by Jabbari, who gouged at the officer’s eyes. A struggle ensued that lasted a few seconds when another officer appeared and tried to help subdue Jabbari from the rear passenger-side of the police vehicle. In the video, that officer, who also has not been named, opened the door and grabbed Jabbari seconds before several shots were fired. The officer immediately retreated as he was shot in the arm. Jabbari died at the scene and both officers were treated at local hospitals. Michigan State Police took over the investigation and turned their findings over to the prosecutor’s office last week. The press release from the prosecutor’s office concluded: “Since the entire struggle and shooting was very quick and lasted only seconds, as verified by witness statements and confirmed by video and audio preserved by the MSP detectives, it is the determination of this office that there was insufficient time to formulate any criminal intent. We find no criminal wrongdoing in the use of deadly force by the officer who was being attacked by the suspect. It is clear that under all of the circumstances that the officer was justified in acting in a manner consistent with self-preservation.”