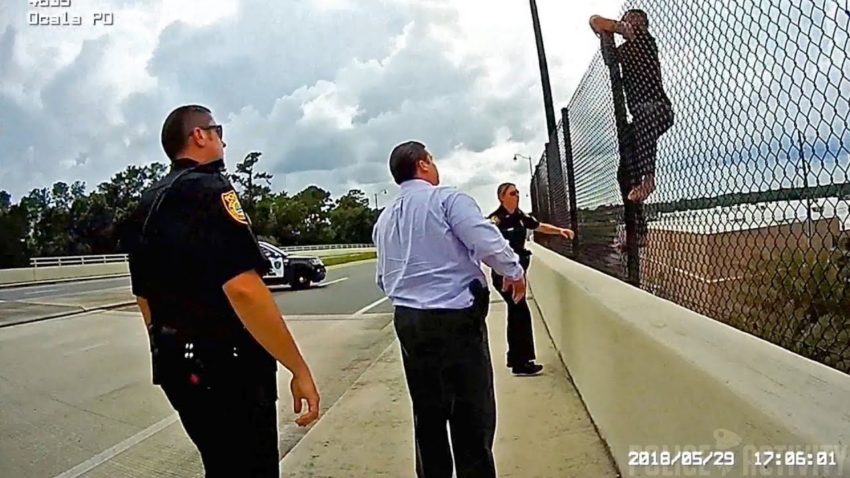 ** (Disclaimer: This video content is intended for educational and informational purposes only) **
The Ocala Police Department released body camera footage of officers working to coax a suicidal man off of an interstate overpass. At 4:47 p.m. on May 29, OPD received reports of a man hanging on the exterior fence of the I-75 overpass at Southwest 43rd Street Road in Ocala. Officer Kristen Whitston was first to arrive and began talking to the man, according to the OPD news release. The man said he had been framed and that there were pending drug charges against him. He also stated that people had been following him for several days, according to OPD reports. The agency could not find that there were any pending charges against the man. Officers were able to get the man to climb to the top of the fence, but then he paused to ask for some specific needs to be met. OPD officials said he referred to a woman several times and was demanding that she write a statement exonerating him of any wrongdoing.

Officers noted that a woman who was stopped in traffic matched the description of the woman about whom the man was speaking. Detective Joshua Fried, the lead negotiator, asked if she would be willing to help by writing a statement as instructed and she quickly agreed to do so. Detective Fried read the document to the man, which he signed and described as a “legal, binding statement.” It said: “Everything is all right. No charges will be filed. I don’t want anybody to get in trouble. Sam has done nothing wrong. He hasn’t done anything.” Officers Mike Hilton and Brennan Grady also aided in discussions with the man. The incident ended with the man safely off the fence about 40 minutes after officers arrived. The man was taken to a local hospital for a mental health evaluation under Florida’s Baker Act. “It ended with a handshake and a hug. As promised,” Fried stated in the release.