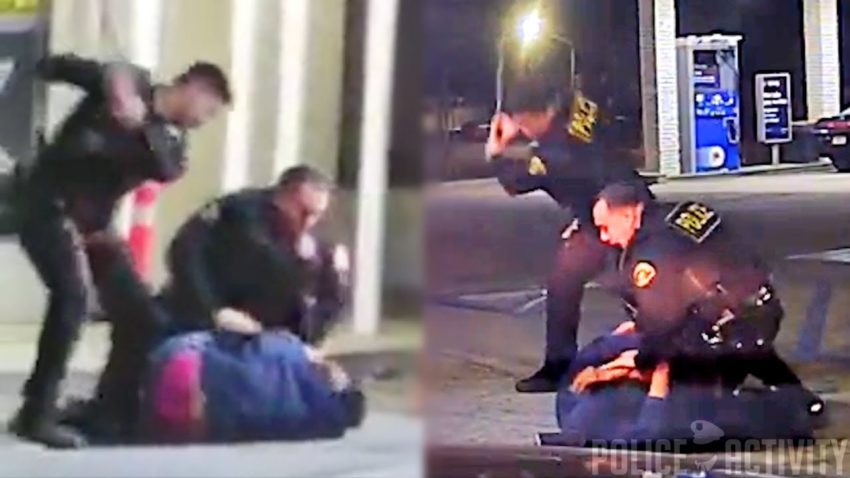 ** (Disclaimer: Video posted strictly for educational and information purposes only) **
After a November traffic stop led to his violent beating, arrest and a broken leg, an Altadena man has filed a claim for damages against the city of Pasadena, its police department and chief, and the two officers involved. Christopher Ballew’s Nov. 9 arrest at an Altadena gas station was captured on video by a bystander and surfaced on social media this month, creating a stir and leading to denunciations from civil rights advocates. “I was beaten that day as if I was a runaway slave,” Ballew, 21, an assistant director at a marketing firm, said at a Wednesday news conference that was also attended by his parents and sister. Pasadena public information officer William Boyer said police officers Lerry Esparza and Zachary Lujan stopped Ballew, because of his car’s darkly tinted windows and missing front license plate. After community pressure, city officials last week released six dash-cam and body-camera videos that provide graphic details of the encounter. After stopping his white Mercedes at a gas pump, Ballew walks towards the station’s mini-market. One of the officers stops Ballew, grabs his arm and leads him back to the car.

“You better stop acting like a dummy, dude,” the other officer yells. Both officers spread Ballew’s feet apart, forcing him into a kneeling position. Ballew begins repeatedly asking for their commanding officer as one of his wrists is placed in handcuffs. After being hit with an officer’s baton, Ballew grabs and pulls the baton and a scuffle ensues. The two officers force Ballew to the ground and continue to beat him with fists and the baton, delivering blows to his back and leg. Other Pasadena police officers arrived on scene, and Ballew was eventually taken to the emergency room. He was later booked on suspicion of assaulting a police officer with a deadly weapon. After spending about 36 hours in custody, he was released on $50,000 bail. The Los Angeles County district attorney’s office declined to press charges against Ballew, citing insufficient evidence. Ballew insists that he tried to comply with the officers’ commands. “The only reason why I grabbed the baton was because he already hit me with the baton,” Ballew said. “When I watch this video, the only thing that I could think of is how thankful I am to still be here. There was a point where the officer pointed his gun at me.” Ballew’s attorney, John Burton, said the confrontation could easily have turned fatal. Burton said one of the objectives of the claim is to determine why the traffic stop intensified so quickly.

“I could be at a press conference with the parents for a wrongful-death case — fortunately that’s not the case,” Burton said. “This is an absolutely out-of-control situation and compounded by a really cowardly and indifferent police management team.” “He was treated in a very inhumane way,” said Delano Yarbrough, president of NAACP’s Pasadena chapter. At a City Council meeting last week, Pasadena’s city manager pledged to release the videos “in the interest of good governance, transparency and in the interest of the public,” Boyer said. The incident marks the first time such videos have been made public in response to a police use-of-force incident in Pasadena since the city deployed police body-worn cameras last year. Boyer is encouraging the public to look through the six videos. “It’s unedited, unredacted; it’s not a 45-second social media post.” Both Esparza and Lujan are still on active duty, and Boyer said the incident is under internal review by Pasadena police. “There are no timelines for anything like this,” he said. Ballew said he has struggled to cope with the encounter. “I get anxiety whenever I see a police car,” he said. “Whenever I hear a police siren, my body starts to shake and I start to look around to see if they’re coming for me because that’s what I feel like right now.”