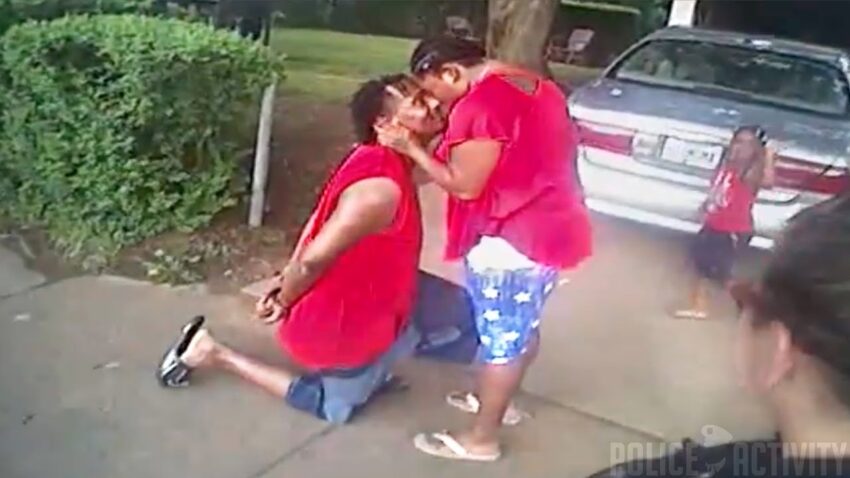 ** (Disclaimer: This video content is intended for educational and informational purposes only) **
Police in Oklahoma were surprised when a man being arrested made an odd request. He wanted to propose to his girlfriend, while still in handcuffs. Brandon Thompson, 35, was arrested at his Muskogee, Oklahoma home on July 4. He’d been wanted for six felony warrants, including possession of a firearm by a felon, possession of a controlled substance and failure to appear in court. Officers had recognized him early that day and tracked him down to find him celebrating the holiday with family and his girlfriend, Leandria Keith. Body cam footage caught the moment on camera, as Thompson made his request to the officers who’d just put him in handcuffs. “I asked the officer if I could propose,” said Thompson in a phone interview. “The officer said, ‘You want to do what?’ and I said, ‘I want to propose to her.'” The officers agreed to Thompson’s request, watching (and filming) as he got down on one knee. “It took us by surprise that he asked if he could do it,” Officer Lincoln Anderson, who is also the Muskogee police spokesman, said via Facebook.

Thompson asked his nearby mother for the ring and was heard saying “I love you,” and “Will you be my wife, please?” His girlfriend, Leandria Keith, said yes. Then, the officers switched Thompson’s handcuffs from behind his back to his front so that he could place an engagement ring on Keith’s finger. “I was shocked,” Keith said. Nevertheless, she said yes and later bailed Thompson out after his arrest. The couple say they now plan to get married as soon as Thompson’s legal troubles are resolved. “When you’re in love with somebody and you know that you want to spend the rest of your life with them, you just want them to know how you feel,” said Thompson. “I wanted a new start for me and with the police taking me to jail I didn’t have to worry about my warrants anymore.” Thompson said that he’s tired of running and plans to turn his life around. Marrying Keith, he said, is one of his first steps.