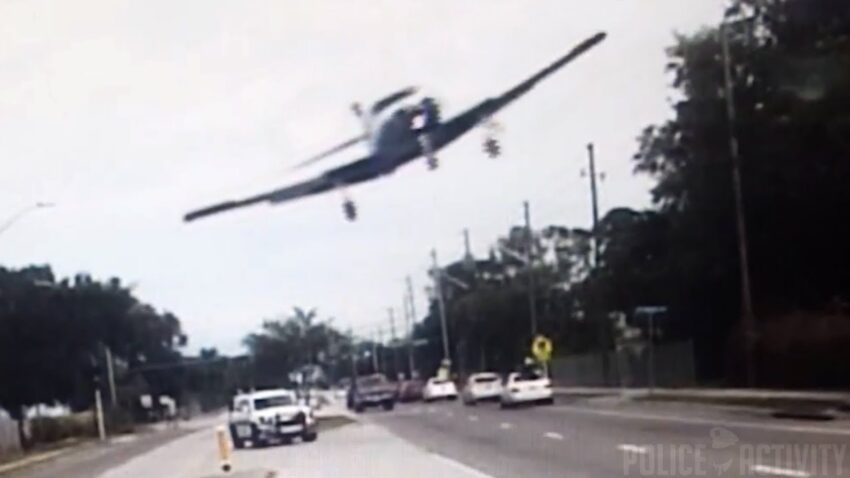 ** (Disclaimer: Video posted strictly for educational and information purposes only) **
Two men walked away unhurt from a small airplane after it clipped a tree and spun around as the pilot tried to make an emergency landing on Keene Road, deputies said. Pilot Marc Benedict, 61, and passenger Gregory Guinee, 55, of Clearwater, were not injured when the single-engine, four-seat Rockwell Commander 112 crashed about 10:25 a.m. Sunday along Keene Road at Sunset Point Road, said Pinellas County Sheriff’s Office spokesman Cpl. Daniel DiFrancesco. Benedict experienced engine trouble as he was returning to Clearwater Air Park from Zephyrhills Municipal Airport, DiFrancesco said. He had taken off for Zephyrhills about 9 a.m. and took off about 10 a.m. for the return trip. Benedict reported engine trouble while flying southwest over On Top of the World, a 55-plus community in Clearwater, and attempted to land on Keene Road.

The left wing hit a tree in the road’s median, causing the plane to spin around and come to a stop on a sidewalk. An investigation is under way but deputies said there was no indication of impairment. The Federal Aviation Administration was scheduled to take overe the probe. Keene Road was expected to be blocked until the plane could be towed away. Wayne Owens, 49, heard the crash from his house on Bentley Street, just one house away from where the plane landed. Owens, an electrician, thought it was a car crash before he noticed the downed tree and mangled plane. He’s heard of other plane crashes nearby. “I feel very uneasy about it,” he said. “I didn’t think about it until after I bought the place that we’re right in the direct line of the airport.”