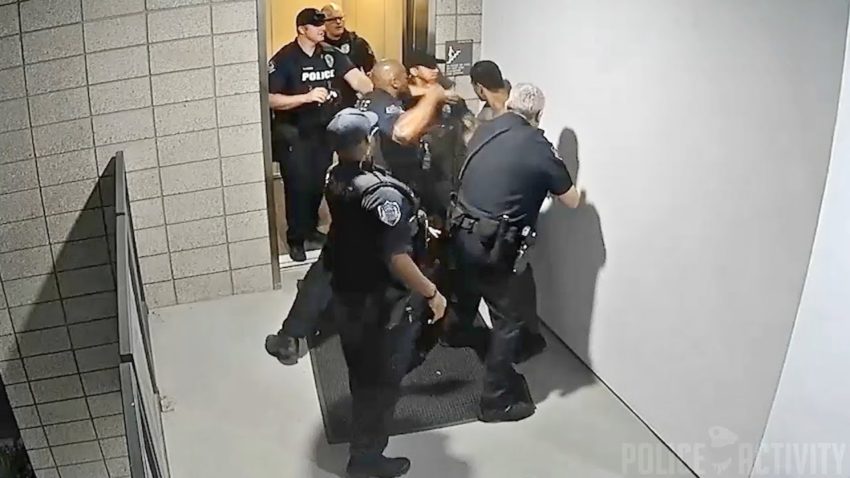 ** (Disclaimer: This video content is intended for educational and informational purposes only) **
Four Mesa police officers are on administrative leave following an incident in May during which a suspect was punched several times. In an interview, Mesa police chief Ramon Batista said on May 23, just before midnight, officers responded to a domestic violence call at an apartment near Main Street and Horne. A woman had reported to police that her ex-boyfriend was trying to break into an apartment. As officers arrived, they made contact with two men leaving the area. When officers directed the ex-boyfriend, 20-year-old Erick Reyes to sit down, he reportedly complied with their orders. Batista said 33-year-old Robert Johnson was heading to the elevator and officers asked him to sit down as well. Johnson reportedly did not comply with their orders, and as they approached him to seat him, he resisted. Officers then struck him several times to get him to comply. According to Batista, four officers were involved. Of them, he says three officers were involved in hitting Johnson, while the sergeant was the lone officer who did not. Batista said he was notified of the incident a week after by a community member, at which point he initiated an investigation into the case. Following the May 23 incident, Johnson was charged with disorderly conduct and hindering. Reyes was charged with disorderly conduct-domestic violence and paraphernalia. “This in no way represents the whole work that is done every day,” Batista said of his department. “They’re human beings and certainly at first glance, this looks like a mistake.” The video made it’s way to Johnson’s pastor, who is teaming up with two attorneys to help come to Johnson’s defense.

“There is no explanation that you can justify that level of force,” said Pastor Andre Miller with New Beginnings Church. Miller said that he’d be “happy” if Chief Batista fired the involved officers. “I understand that police have to use force in certain situations,” Miller said. “At the end of the day, when do you not use force?” Pastor Andre Miller, Attorney Joel Robbins, and Attorney Benjamin Taylor released the following joint statement on the incident: “On May 23rd, 2018, Robert Johnson was beaten by multiple Mesa Police officers while others looked on. Mr. Johnson was cooperative and following police instructions. Mr. Johnson was sitting peacefully against a wall when the assault began. He did not resist. The misconduct of these officers would have gone unnoticed if it had not been captured by surveillance videos at the apartment complex where the assault occurred. We hope and pray that the Mesa Police Department will accept responsibility for the misconduct of these officers. Mesa must take concrete steps to ensure that culpable officers are disciplined, retrained, or dismissed. The Mesa Police Department must develop a law enforcement culture that meets community and constitutional norms and ensures that police and citizens go home safely after police interactions. We plan on holding a press conference Thursday, June 7, 2018 to discuss this incident and the culture of violence at the Mesa Police Department.”