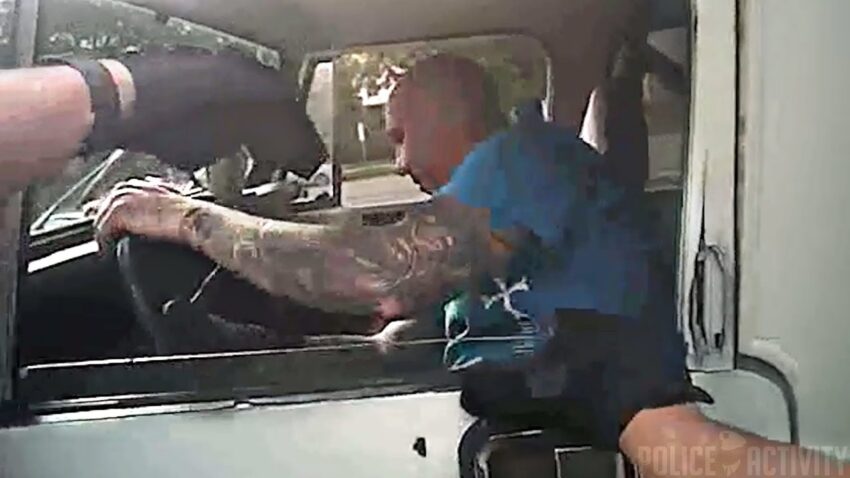 (Disclaimer: This video content is intended for educational and informational purposes only)
The Salt Lake County District Attorney has ruled that an officer who shot a suspect in a Maverik parking lot on September 28 was legally justified, and videos show the suspect assaulting two officers. DA Sim Gill and Salt Lake City Police Chief Mike Brown gave a press conference Wednesday announcing the decision, during which they showed body cam footage from one officer, surveillance from the Maverik and video captured by a bystander. Gill said things began police were called about Michael Bruce Peterson, who had allegedly assaulted an employee while trespassing at a salon at 363 South and 500 East in SLC on September 28. Video shows officer Greg Lovell first speaking with Peterson, asking him to come over and talk to him. The man continues walking, and Gill said while the suspect is out of view of the camera he tried to enter the officer’s vehicle. The officer told him to stop, and Peterson began walking away. Lovell follows the suspect at what Gill called a safe distance until the man reached a Maverik at 300 South and 508 East, where Peterson got into a Jeep. Gill said Lovell observed the man was acting erratic and potentially under the influence, and he was concerned that if the man started driving he may hurt someone.

After the suspect entered the vehicle, the owner of the Jeep came out of the convenience store and told the suspect to get out his car. Lovell asks the man to get out of the car, and eventually deploys a Taser on him. Gill said the suspect became “enraged” after being hit by the Taser, got out of the Jeep and began punching Lovell. The body camera footage becomes difficult to follow as the hand-to-hand altercation ensues, but surveillance cameras show the officer retreating across the parking lot as the suspect follows. At this time Lt. Andrew Oblad arrived on scene to respond to Lovell’s call for backup and saw the suspect assaulting Lovell, who dropped his baton in the altercation. The suspect picks up the baton and begins attacking Lovell with it, striking him several times. Gill said Oblad tried to divert the suspect’s attention from Lovell. Video shot by a bystander shows the suspect turning his attention toward Oblad and charging at the officer, holding the baton in what Gill described as a “batter’s stance.” Oblad fired several shots, all of which struck the suspect, but the man continued charging toward the officer and struck him with the baton. Gill said Oblad saw that his initial shots had not stopped the man and began to worry he was wearing a protective vest.

As the suspect continued his assault, Oblad fired several more times. Gill said in total 10 shots were fired, all of which struck the suspect. Peterson was pronounced dead at the scene. Gill said that because the suspect was attacking the officers with the baton, Oblad reasonably believed deadly force was necessary to prevent death or serious bodily harm to himself or to another–and as such his use of deadly force was justified under Utah law. Oblad said he initially reached for his pepper spray upon arriving on scene, but once the suspect picked up Lovell’s baton he felt the suspect’s attacks might become deadly. Gill and Brown both praised Lovell for his efforts to de-escalate the situation, noting that he began by talking to the man before following at a safe distance, only confronting the man when he feared he was be about to begin driving and possibly hurt someone. Lovell first deployed a Taser and then his baton, and only after all of that failed to stop the assault did Oblad fire his gun.