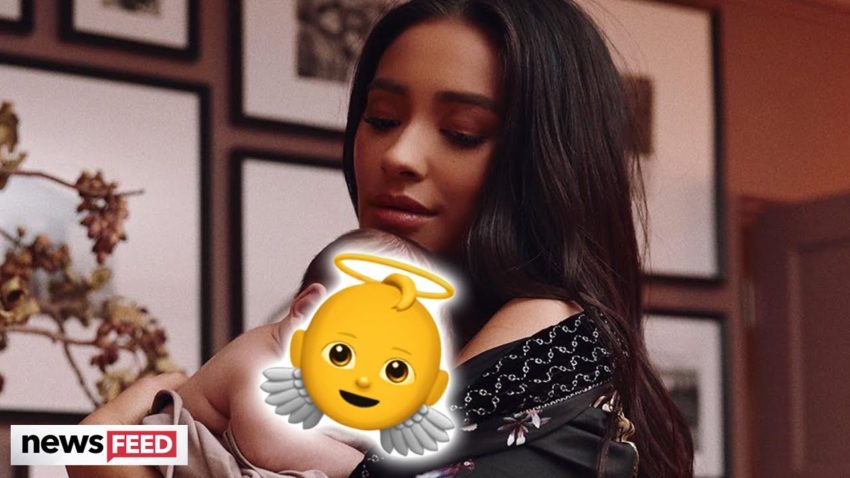 Guys, get ready for some all time cuteness! Shay Mitchell has FINALLY released the first photos of her newborn daughter AND her unique name!

What’s up guys, It’s Sussan Mourad here with Clevver News and Oh my, Shay’s baby is all kinds of adorable. Shay and her partner Matte Babel have kept their daughter’s face and name a pretty little secret… until now!

Everyone, meet Atlas Noa. And just look at her sweet face! Shay wrote a touching tribute to her daughter on instagram:

In my 32 years of life I thought I had seen a lot of places, experienced a lot of things, met a lot of people and felt love…then came you.
Truth is I had no idea I was capable of loving anything like this before you arrived. You wonder if that’s just something people say, but it’s as if the chemical makeup of my entire body and soul changed the minute we met.
I wake up each day… still in awe that you are mine, and I am yours.

NAWWWWWW How sweet, right? Shay, Matte, and baby Atlas were all featured in Vogue — not a shabby first modeling gig, baby girl — where the first time mom shared how she and her longtime boyfriend landed on such a fitting name. Atlas, however, is a nod to Shay’s love of travel.

Shay said of her daughter’s name, “A close friend of ours was listing off names for her daughter that she had a year and a half ago. Then she said Atlas and I looked at Matte, and he looked at me, and I was like, ‘Oh my gosh.’ It’s just the perfect name; from that day, we knew it was going to be Atlas.”

The new momma also opened up about how different her life has become since giving birth last month.

“I find myself being a lot more present, and I’m just looking at her every single day. You reflect on how fast time passes when you’re forced to slow down,” she says. “The surprising thing is how much I enjoy this calmness.”

The actress, YouTuber, and travel brand creator certainly has a lot going on since adding “mommy” to her plate, and Shay revealed cutting back on the work has been especially challenging.

“I’ve had to reprioritize my work time with her schedule, and that’s been interesting for me…There is a lot of stress and anxiety.

Adding to all that angst is the fact that Shay is VERY open on her Youtube channel. She documented her entire pregnancy for her series, “Almost Ready” with a pretty detailed labor and delivery video.

But, as you know, sharing on the internet opens celebs up to a TON of criticism, especially as new parents. Shay was no exception.

Shortly after Atlas was born, the actress and her boyfriend attended Drake’s birthday party in Los Angeles. She shared a video of them dancing on insta stories with the caption “parents.”

Many fans slammed Shay leaving the house so soon after the baby was born. And they were NASTY. Shay even posted a few of the more hurtful comments onto her stories.

One user wrote: Mother of the year award right here!!!! As if you could seriously leave your baby to go to a party?! I hope the child’s aid look into this and your abilities to be a good parent cause damn. You’re lacking some serious skills there sweety.

Angel, by the way, is Shay’s dog. So clearly, the new mom isn’t too concerned about internet trolls. She addressed the incident again in the Vogue interview saying:

“It concerns me that people are so quick to pass judgment on others, especially without knowing any facts, and behind the protection of the screen. There are real issues in the world, and I wish people would stop jumping to extreme conclusions about things that aren’t their business, but Matte and I just choose to ignore it because we couldn’t be happier right now.”

That’s definitely words to live by right there.

Honestly though, we didn’t really expect Shay to approach motherhood and change who she is. This is the woman who revealed her baby’s gender via an epic Power Rangers battle…

had a baby shower at a strip club…

And produced a pregnant dance music video in her living room…

If there’s one thing we know for sure it’s that Shay Mitchell is gonna do exactly what she wants to do. And we’re here for it.

But let’s hear from YOU! Do you love the baby name Atlas? So different, right? I personally love the fact it’s a name after something near and dear to Shay’s heart, travel! Let us know your thoughts down below.

And don’t forget to subscribe to Clevver News for allll the latest update on entertainment news. We got you! I’m Sussan Mourad! Thanks for hanging out! See you next time!