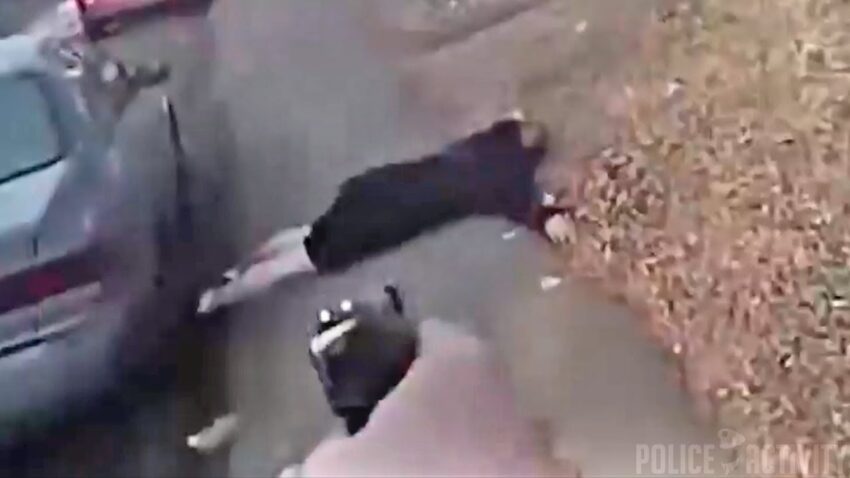 ** (Disclaimer: Video posted strictly for educational and information purposes only) **
With his rifle drawn, Fort Collins Police Services officer Matthew Brede shouted “drop it” to the man walking toward him with what appeared to be a handgun, newly released video footage of the Jan. 21 police shooting shows. In the moments after, Brede fired his rifle 10 times, and Austin Snodgrass, the man in front of him, fell to the ground, suffering from three gunshot wounds. Snodgrass survived the shooting. FCPS released body-mounted camera footage of the January shooting on Tuesday. Larimer County District Attorney Cliff Riedel cleared Brede of any criminal wrongdoing in the incident in February, saying Snodgrass had admitted the standoff outside his Hastings Drive home was an attempt at “suicide by cop.” At a news conference Tuesday, Interim Police Chief Terry Jones went over the facts of the case, and reiterated that Snodgrass had orchestrated the confrontation with Brede as an attempt to take his own life. “Mr. Snodgrass is extremely fortunate that he survived his wounds,” Jones said. “Any time you’re shot with this type of weapon, the outcome is generally catastrophic.” Snodgrass survived was ultimately sentenced to serve three years in community corrections for felony menacing, after he pleaded guilty to that charge. Snodgrass, now 25, called 911 on Jan. 21 and falsely reported that an intruder had stabbed his roommate.

On Tuesday, police shared video footage of the shooting and an audio recording of the 911 call from Snodgrass that brought police to his home. When officers arrived at the home, Snodgrass approached Brede with a pellet-gun replica of a handgun and ignored commands to drop it. Brede, believing the gun to be real, fired his rifle 10 times, hitting Snodgrass three times. The video footage shows officers surrounding the home after the shooting, trying to figure out if anyone else was inside. After he was shot, Snodgrass complied with officers’ orders to show his hands. One officer handcuffed Snodgrass as he lie moaning on the ground. A few moments later, several officers carried him away from the home, to an area where emergency crews gave him medical treatment. Part of the reason for the delay in releasing the footage was due to administrative turnover within the department as well as waiting for criminal and internal reviews to be completed, officials said Tuesday. Larimer County Community Corrections is designed to reintegrate felony offenders into the community and provides counseling, life skills training, financial planning and management and crisis intervention. Law enforcement officers in Larimer County have shot five people — four of them fatally — so far in 2017. There were three officer-involved shootings in Larimer County in 2016.