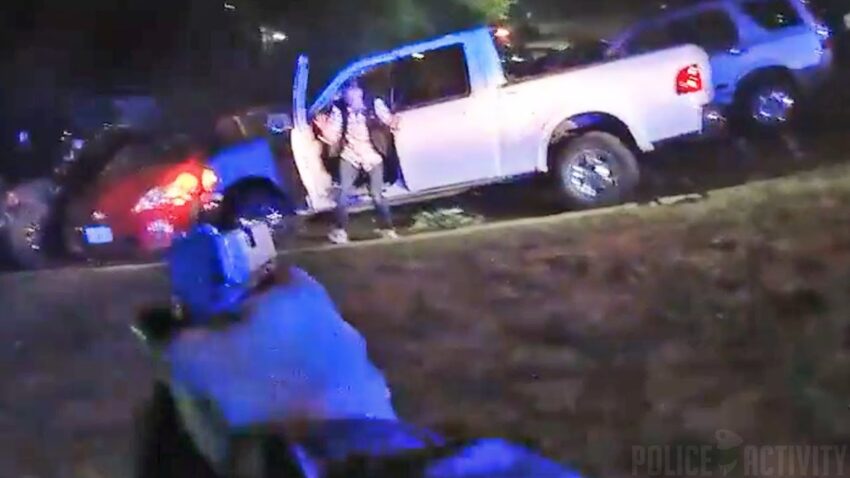 ** (Disclaimer: Video posted strictly for educational and information purposes only) **
A University of Georgia Student is out of jail after leading police on a high-speed chase through downtown Athens early Thursday morning. The entire incident was recorded the bodycam of the Athens Clarke County Officer involved. Police said when he was being pursued 19-year-old Hunter Wilkerson managed to snap a picture of his speedometer and posted it on Snapchat just before he crashed. The high-speed pursuit started when a white truck speed by an Athens-Clarke County Police officer parked at Jittery Joe’s Coffee on South Milledge Avenue. UGA Student Kaylor Sexton, who saw the video, was appalled at the recklessness. “You never know who’s coming or going. There are people, families out here that’s scary,” said Sexton. On the police officer’s body cam, the truck can be seen blowing past several red lights through downtown Athens at speeds ranging between 70 to 90 miles per hour. Less than two minutes into the chase, on Oconee Street, the driver loses control. “He just lost it and crashed he just crashed,” the officer is heard saying on bodycam. Police said the truck driven by Wilkerson crashed into several parked vehicles. At one point, Wilkerson asked the arresting officer if he could see the cars he hit. Wilkerson is heard on bodycam trying to have a discussion with the officer.

Wilkerson: “Can I see what I did?

Wilkerson: “Can I see what I did? Can I see all the cars I hit?”

Athens-Clarke County Police said their investigation revealed, while on the run, Wilkerson managed to post a picture of his speedometer on Snapchat. “It’s really easy with the culture of kids today for everything to be so centered around social media, but it’s not worth it, especially when your life hangs on the balance and other people’s lives,” said UGA Student Marika Carlson. Athens-Clarke County Police said UGA Police stopped Wilkerson for stealing street signs from campus, but did not pursue when he fled. Spokesman Epifanio Rodriguez said when Wilkerson was spotted about 15 minutes later on city streets he had to be stopped. “Our officer seeing the rate of speed that this person was driving. He believes there were people in danger and he had to somehow attempt to stop this vehicle,” said Rodriguez. Rodriguez said it’s a wonder no one was hurt. Wilkerson faces numerous misdemeanor and felony charges connected to the chase and theft of signs.