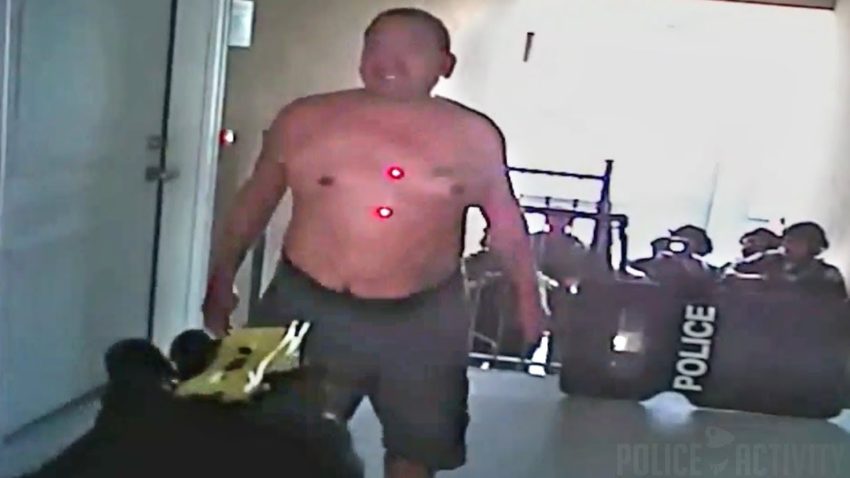 ** (Disclaimer: This video content is intended for educational and informational purposes only) **
A Utah couple is suing two West Valley City Police officers for actions they took against him in 2016 which, he said, changed his life. “Exit the apartment now,” that’s the sound that could be heard from police body camera footage of the event. On August 3, 2016 Tabeththa Coronado called police for help. A short time later, more than a dozen officers surrounded their 4th floor apartment in West Valley City, dressed in full tactical gear. Tabeththa’s common-law husband, Fernando Coronado, answered the door; he was half naked and drunk. For more than two hours, officers told Coronado to come to them, but he never did. Officers took action against Coronado, deploying a stun gun on him after he began to raise his arms, pound his chest, yell and take a step toward the officers. Coronado fell to the ground and hit his head on the cement below.

Now Coronado has filed a law suit against the officers who he said caused him to sustain life-long injuries and, according to his attorneys, violate his constitutional rights. “What you have here is forceful take down, with a Taser and Fernando had a right to be free from that kind of force,” said Bob Sykes, Coronado’s attorney. Sykes said, by law, you can’t use a stun gun on someone who is nonviolent and only guilty of – at most – misconduct. According to West Valley City police, they had good reason to believe Fernando was dangerous. According to court documents, he threatened to kill his common-law wife, put a knife to his throat and threatened to kill himself, barricaded in his home, and repeatedly threatened to kill officers or anyone who attempted to enter his house. When Coronado and his attorneys were asked about charges or a conviction, they couldn’t seem to remember.

“Where there any charges filed against you?” said Sykes.

“Yeah… I don’t know, there was a whole list,” said Coronado.

“I do not think that they prosecuted him, I’m not sure, do you know Chad?” Sykes asked his co-counsel, Chad McKay.

“Yeah they did,” replied McKay.

“What happened?” asked Sykes. “Well, I don’t remember all of the details right now,” McKay responded.

In a statement from West Valley City police they said, in part:
“An injury to anyone involved in an incident is unfortunate, however, officers must act to ensure the safety of not only the suspect, but also the safety of the public, themselves and other officers.”

When asked how Fernando feels about police officers following this incident, Coronado said, “The next officer that pulls me over, I might hurt him, or he might get shot.”