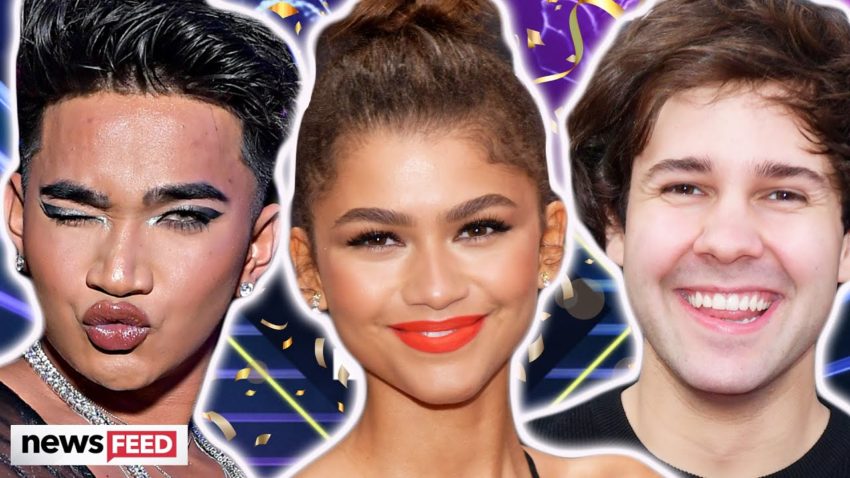 The 2019 Peoples’ Choice Awards gifted us with yet another year of fan-voted music, movies, TV and pop culture, as if we don’t have enough to watch or do, but right now, we’re breaking down all the star-studded winners of the night, so let’s get to it, shall we?
What’s up guys, it’s Erin Robinson back here on Clevver News, Happy Monday! I am still buzzing after attending the People’s Choice Awards last night and I just want to say, BRAVO to literally every winner from last night!But seriously, it’s like we took a trip down memory lane and back to the early 2000s because all of Jennifer Aniston, Pink, and Gwen Stefani were honored during last night’s show… And trust me, we’ll get to all that, but first, I’ve gotta pay tribute to YouTube’s very own David Dobrik on his big win for Social Star. No joke, my entire Twitter feed was filled with well wishes from his biggest fans and were naturally well-deserved. I got to say hi to him on the red carpet before his win and he said he was so honored for his nomination, and now I’m sure even more his win!Good news: there were no lawsuits in the making of David’s win last night.
But speaking of YouTubers, Bretman Rock also ‘rocked’ last night’s show, taking home Beauty Influencer of 2019. So if you don’t know, well, now you know to be on the lookout for him. He is one of my favorite Youtubers and I got to chat with him last night, and he absolutely slayed the red carpet.As for music, Shawn Mendes scored big tonight, taking home Male Artist of 2019 AND Song of 2019… And sorry not sorry for “Senorita” about to be stuck in your head once again, but a win is a win.
KPop girl group Blackpink also won big, taking home three PCAs for Group of 2019, Tour of 2019 and Music Video of 2019 for “Kill This Love”. Newcomer Billie Eilish took home the PCA for Female Artist of 2019, while Taylor Swift’s “Lover” album scored the 2019 PCA Album of the Year. In the film categories, Avengers: End Game took home Movie of the Year, while Robert Downey Jr. dedicated the win to the late, great Marvel creator Stan Lee…The film also went on to win Action Movie of 2019, and gave another nod to RDJ for Male Movie Star of 2019. Our girl Zendaya won big for Female Movie Star, as well as Drama TV Star for her role in HBO’s Euphoria. Speaking of other dramas, Cole Sprouse took home the Male TV Star of 2019 honor, while the Netflix’ thriller Stranger Things cast took home quite a bit of hardware, winning Show of 2019, Drama Show of 2019 and Female Star of 2019 for Millie Bobby Brown’s role as Eleven.
nd it wouldn’t be a proper Hollywood night out without some sort of mention from the Kardashians.

This time around, it was Khloe who nabbed the PCA for Reality TV Star, and The Bachelorette’s Hannah Brown who followed right behind her reality TV footsteps, winning Competition Contestant of 2019.I also have to give a mention to Kevin Hart, who made his first public appearance since his serious car accident back in September. Jennifer Aniston received the Icon Award during last night’s show, and if you’re any bit of a ‘Friends’ fan, this one will hitchya right in the feels, so you’ve been warned…
Gwen Stefani was also honored with the Fashion Icon, and the all-around badassery that is Pink took home one of the most prestigious awards AKA the Champion Award, where she was recognized for her support and work with, like, every foundation in the nation… No Kid Hungry, Make-a-Wish, Planned Parenthood, REVERB, Autism Speaks, UNICEF and Human Rights Campaign.
Seriously, is this woman real orrrrrr…?
Anyway, this seems like a perfectly good note to end on, so be sure to share all your thoughts on last night’s PCAs winners down below… also, were you surprised by any of the results? Or was there another nominee you hoped would take home a Peoples’ Choice Award?
Get to talking down here in the comments, and then don’t forget to click right over here for another new video. As always, I’m your host, Erin Robinson don’t forget to subscribe and I’ll catch ya later!